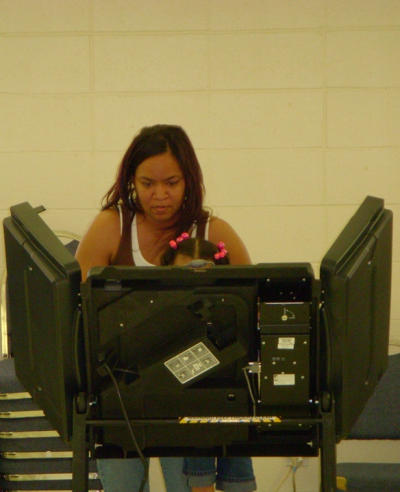 Although you wouldn't guess from the photograph on the right and others available online (here, here, and here), North Carolina law places heavy restrictions on photography and videography inside polling places on Election Day. Luckily, North Carolina also provides some helpful guidelines on permissible newsgathering activities at the polls.

Section 163-166.3(b) of the North Carolina General Statutes says that no person may "photograph, videotape, or otherwise record the image of any voter within the voting enclosure, except with the permission of both the voter and the chief judge of the precinct." Depending on the attitude of the chief poll worker at your precinct towards photography and videography, this amounts to a near-prohibition on using recording devices inside the "voting enclosure," which means "the room within the voting place that is used for voting."  N.C. Gen. Stat. § 163-165.

Section 163-166.3(c) goes further.  It expressly prohibits you from photographing, videoing, or otherwise recording "the image of a voted official ballot for any purpose not otherwise permitted under law." This means that you cannot photograph or video any one else's ballot, which is something to avoid in any state regardless of specific prohibition. But this also means you cannot film or photograph your own marked ballot. Note that that section 163-166.3 prohibits using cameras and video equipment inside polling places (absent permission under subsection (b)); it does not expressly prohibit bringing such devices (including cell phones) inside with you.

Outside of the polling place, North Carolina law does not expressly prohibit using a camera or video recorder.  Section 163-166.4 creates a buffer zone (no less than 25 and no greater than 50 feet) around the polling place, in which it is unlawful to "hinder access, harass others, distribute campaign literature, place political advertising, solicit votes, or otherwise engage in election‑related activity." To be completely safe, you may want to take photographs or film outside the buffer zone, so as to avoid "harass[ing] others" or 'hinder[ing] access."  However, the law probably permits you to photograph and film in this zone if your activity is not disruptive or intimidating.  If you want to interview other voters, you should get their permission first and do your interview outside the buffer zone.

In April 2008, the North Carolina State Board of Elections issued a press release presenting guidelines for poll workers and media representatives regarding the use of cameras and recording equipment at polling places.  In a telephone conversation, a state official told us that these guidelines should apply equally to members of the public who wish to engage in newsgathering activities at the polls.  The guidelines are:

It is hard to say whether poll workers actually will extend to ordinary citizens some of the privileges mentioned in the guidelines, like granting permission to take a panoramic photograph or video inside the polling place.  In any event, anyone interested in taking photos, shooting video, or interviewing voters would do well to follow the prescriptive aspects of the guidelines.


This post is part of our series looking at state election laws that regulate activities at polling places on Election Day.  We cover these laws from a general standpoint in the Documenting Your Vote section of our legal guide. As I've said before, we'd love the help of our readers with our election law research.  If you know of any other provisions of North Carolina law that might affect someone's ability to document the vote, or any cases interpreting North Carolina law on these issues, please let us know in the comments.  And, if you've got input on election laws in other states, please leave a comment or contact us directly.