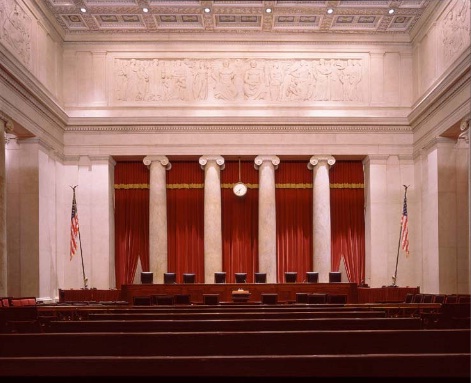 People are discovering a recently-posted YouTube video that apparently shows both a portion of the oral argument in a campaign finance case in October 2013 and Wednesday's interruption of an oral argument before the U.S. Supreme Court.

The first half of the video says that it is shows the argument is in McCutcheon v. Federal Election Commission, No. 12-536, a case argued on Oct. 8, 2013 which challenges the constitutionality of federal limits on contributions to non-candidate political committees. The date stamp on part of the video matches the date that the case was argued. While the audio of the Justices and lawyers speaking can be heard, its impossible to make out the words. The scene, however, is clearly the courtroom of the U.S. Supreme Court.

The video then cuts to the interruption, during the Feb. 26, 2014 argument in Octane Fitness v. Icon Health & Fitness, No. 12-1184, a patent case. This half of video shows Kai Newkirk, a member of the group 99Rise -- which takes credit for the interruption in a press release  -- interrupting the argument to state that the court's 2010 decision in Citizens United v. Federal Election Commission, 558 U.S. 310 (2010) should be overturned, and that the contribution limits at issue in McCutcheon should be upheld. The video also shows Newkirk being removed from the courtroom.  (He was subsequently arrested and charged under 40 U.S.C. § 6134, which makes it illegal to "make a harangue or oration, or utter loud, threatening, or abusive language in the Supreme Court Building or grounds.")

Both portions of the video are jumpy and haphazard, and were apparently shot with hidden cameras in violation of the the court's strict prohibition on cameras in the courtroom. The video acknowledges this, beginning with the text, "What you're about to see have never been seen before. This is video from inside the chamber of the U.S. Supreme Court. Under their arcane rules, no one is allowed to record the proceedings. Not even C-SPAN ... (sic) in the year 2014." Other videos uploaded by the same YouTube user show what appear to be the full videos shot during the Octane Fitness argument. From the datestamps, it appears that three separate cameras were used. None of the words said in the videos are discernible, except for Newkirk's statement. A 23-minute video of the McCutcheon argument is also posted.

There has been growing pressure for the Supreme Court -- which controls it own rules -- to allow still and video cameras to cover its proceedings, including in an ad campaign launched last week. But there has been little movement on the issue, with federal trial courts conducting a second "trial" of cameras in selected courtrooms. When an attorney was indirectly tweeting from an overflow room at the court during oral arguments in the 2012 case challenging the constitutionality of the Affordable Care Act (Obamacare), the court asked her to stop.

The new videos may be less remarkable for what they show, than that they exist at all.  They demonstrate that not everyone is prepared to wait for the Court to reform its own procedures. It will be interesting to see how the Court reacts.

The Huffington Post has an interview with Mr. Newkirk.

In an op-ed reacting to the Court's decision in McCutcheon, Mr. Newkirk gives a few more details on his interruption, although he still does not explain how the video was recorded.

Newkirk, who was detained overnight after his disruption, pleaded guilty to the charges against him but was given a minimal sentence of time served and a $150 fine. He is also barred from the U.S. Supreme Court grounds for 12 months.