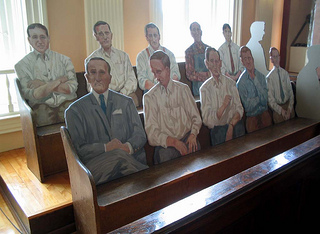 In August 2011, California adopted a statute making it a crime for jurors to use social media and the Internet to do research or disseminate information about cases. Now, two years after the law went into effect, the state's Judicial Council has recommended that the statute be repealed.

The Judicial Council adopted the recommendation (item E on the Consent Agenda) during its Dec. 13, 2013 meeting (audio), and will advocate for the repeal during the 2014 legislative session.

The statute, 2011 Cal. Laws chap. 181 (effective Jan. 1, 2012, codified at Cal. Penal Code section 166(a)(6)), expanded the state's jury instructions admonishing jurors not to use the Internet, and provided that "willful disobedience by a juror of a court admonishment related to the prohibition on any form of communication or research about the case, including all forms of electronic or wireless communication or research" could be punished as civil or misdemeanor criminal contempt of court.

Assembly Member Felipe Fuentes, who sponsored the legislation, explained at the time that although prior law "arguably prohibits the use of electronic/wireless communication devices to improperly communicate, disseminate information or research, the fact that this kind of communication is not expressly included in current law has resulted in increased problems in courts across the county." The Judicial Council endorsed the proposal.

But now the Judicial Council reports that the possibility of criminal sanctions actually impeded courts' inquiries into improper online activity by jurors.

[B]y making electronic communication about the trial a crime, subdivision (a)(6) inadvertently impairs the ability of the court to determine if misconduct occurred. Because a prosecutor may charge the juror with a misdemeanor, questions posed by the court may implicate the juror’s constitutional rights against compelled testimony and self- incrimination. The implication of the juror’s constitutional rights could thwart the court’s ability to conduct an informal inquiry into the juror’s alleged use of electronic communications during the trial.

The Council recommends that the civil contempt sanction adopted by the law remain, since judges have the inherent authority to waive civil contempt. Thus individual judges can offer jurors immunity when doing so would further an investigation of juror misconduct and determine whether a mistrial took place.

"Courts need to have the ability to inquire into juror activities that may bear on the outcome of the trial without implicating the juror’s constitutional rights associated with the possibility of criminal contempt of court sanctions," the Judicial Council report concludes.

If Cal. Penal Code section 166(a)(6) is repealed, California judges -- like their brethren elsewhere -- would still be able to seek criminal and civil contempt against jurors who violate instructions not to use the Internet during trials. But they would not be required to do so.

Meanwhile, the danger of mistrials due to jurors' use of the Internet and social media remains a growing problem, with no good solution.