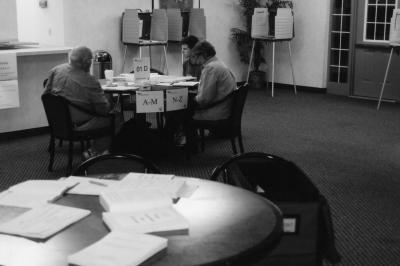 Continuing our focus on swing states, I'll look today at the laws regulating polling place activities in Ohio. These laws may impact your ability to document your own voting experience through video and still photography, as well as your ability to carry out other newsgathering functions, such as interviewing other voters outside of polling places.

Ohio law does not expressly prohibit using a camera or video recorder inside a polling place while you are voting.  Section 3501.35(B) of the Ohio Revised Code states that no person other than an election official, employee, observer, or police officer may enter a polling place "except for the purpose of voting or assisting another person to vote." This could mean that any activity other than voting is prohibited, but the language does not compel this result. The photo above and others like it suggest that at least some Ohio poll workers allowed voters to take photographs inside of polling places during the 2008 Primaries.

Ohio law places stringent restrictions on other activities in and around the polling place.  Sections 3501.30 and 3501.35 create a 100-foot buffer zone outside the polling place entrance, which also extends to within 10 feet of any voter in line, if the line extends beyond the 100-foot zone.  Poll workers mark off the zone with small U.S. flags.  In this area, no one may "loiter, congregate, or engage in any kind of election campaigning," "hinder or delay" a voter from reaching or leaving the polling place, or "[s]olicit or in any manner attempt to influence any elector in casting [their] vote," among other things. These broad provisions appear to prohibit talking with voters while they are entering or leaving the polling place or even standing inside the zone, except when waiting in line to vote.

Mainstream media companies have twice successfully challenged these statutes in court on First Amendment grounds.  In ABC, Inc. v. Blackwell, a federal district court in Ohio held that Ohio election officials could not enforce them against media representatives engaging in exit polling within 100 feet of a polling place. In Beacon Journal Publishing Co. v. Blackwell, the Sixth Circuit Court of Appeals held that Ohio officials could not enforce these provisions to bar media access to polling places for purposes of newsgathering.  The court ordered the Secretary of State to permit media representatives "to have reasonable access to any polling place for the purpose of news-gathering and reporting so long as [they] do not interfere with poll workers and voters as voters exercise their right to vote." 389 F.3d 683, 685 (6th Cir. 2004). In a February 2008 advisory opinion sent to county boards of elections, the Secretary of State interpreted this judicial opinion as requiring election officials to grant "representatives of the media access to polling locations," apparently including inside of the buildings.

Unfortunately, the Secretary of State has taken a restrictive view of who qualifies as a representative of the media.  In the February 2008 advisory opinion, Jennifer Brunner advised poll workers to consider a number of factors in determining whether or not to grant access to someone for newsgathering purposes.  First among these factors is "the credentials of the media representative, and whether the purported media representative is from an accredited media source as opposed to an internet writer." So, it looks like non-traditional journalists and especially online publishers may get second-class treatment come November.

What does this mean?  Nothing too severe -- just that the 100-foot loitering/hindering/soliciting prohibition may still apply to many journalists and ordinary citizens who don't fit into the mainstream media mould.  If you don't qualify as a media representative, then you should not try to interview voters inside the 100-foot zone; poll workers would likely read this as "hinder[ing] or delay[ing]" voters.  On the other hand, it's not clear whether taking photographs or shooting video in an unobtrusive way inside the 100-foot zone would violate the law.  Photographing and filming doesn't "hinder or delay" voters in any meaningful sense, and it doesn't obviously fall into the categories of "solicit[ing]" voters or  "loiter[ing], congregat[ing], or engag[ing] in any kind of election campaigning." Ohio Rev. Code § 3501.30(A)(4), 3501.35(A)(1).  In addition, regardless of your status, the law permits you to take photographs, shoot video, and interview voters (with permission) outside the 100-foot zone, as long as you are not on someone's private property.

That said, anyone engaging in newsgathering activities at the polls -- whether "media" or not, whether inside or outside the polling place -- should be careful not to interfere with, intimidate, or invade the privacy of other voters.  Paralleling the language above, section 3599.24(5) makes it a crime to "loiter in or about a registration or polling place during registration or the casting and counting of ballots so as to hinder, delay, or interfere with the conduct of the registration or election."  Section 3599.20 makes it a crime to "attempt to induce an elector to show how the elector marked the elector's ballot at an election."  So, don't get too close to other voters inside the polling place if you're using a camera.  (Incidentally, section 3599.20 also makes it a crime to "allow [your own] ballot to be seen by another" -- it is not clear whether this applies to photographing or videoing your own marked ballot and then posting it on the Internet.)

Finally, section 3501.33 gives election officials the authority to "enforce peace and good order" at the polls.  It charges them with keeping the entrance "open and unobstructed" and preventing "any improper practices or attempts tending to obstruct, intimidate, or interfere with an elector in registering or voting."  In support of this authority, they may order the arrest of anyone violating the laws discussed above.  As a practical matter, it may be hard to challenge the discretion election officials have to decide what interferes with "peace and good order."

This post is part of our series looking at state election laws that regulate activities at polling places on Election Day.  We cover these laws from a general standpoint in the Documenting Your Vote section of our legal guide. As always, we'd love the help of our readers with our election law research.  If you know of any other provisions of Ohio law that might affect someone's ability to document the vote, or any other cases interpreting Ohio law on these issues, please let us know in the comments.  And, if you've got input on election laws in other states, please leave a comment or contact us directly.

Update:  An Ohio election official informed us that election officials could prohibit the use of cameras and video equipment as a means of enforcing "peace and good order" under section 3501.33.  In addition, a reader informed us that, on Election Day, an election volunteer told him to refrain from using a camera in the polling place.  The volunteer said something about a new law prohibiting the use of cameras, but we have not been able to confirm the existence of any such law.