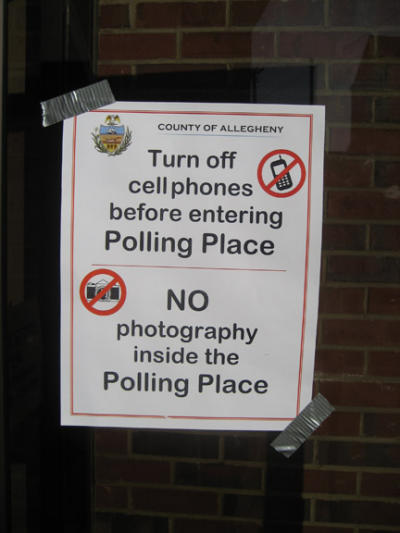 Although Pennsylvania no longer looks like much of a swing state, today I'll discuss the Pennsylvania laws that impact your ability to document your own voting experience through video and still photography, as well as your ability to carry out other newsgathering functions, such as interviewing other voters outside of polling places.

While Pennsylvania has no state statute expressly prohibiting the use of cameras or video equipment inside or outside of polling places, an attorney in the Pennsylvania Department of State informs us that county boards of elections may adopt rules banning the use of cameras and video equipment inside those polling places under their authority. Anyone interested in using a camera or video recorder at the Pennsylvania polls on November 4 should therefore contact the local county board of elections to see if there is an outright prohibition in place.

If you're interested in the legal basis for these local rules, section 2642(f) of Title 25 of Pennsylvania Statutes states that county boards of elections have the power to "make and issue such rules, regulations and instructions, not inconsistent with law, as they may deem necessary for the guidance of voting machine custodians, election officers, and electors."  Putting aside First Amendment concerns that state officials probably do not share, a rule banning photography or filming isn't "inconsistent with law" and would arguably further county election officials' duty to "keep order in the voting room."  25 Pa. Stat. § 3060(f).  Such a rule might also act as a prophylactic against violations of other election laws, discussed below.  Local control over this issue may explain why some Pennsylvania voters were permitted to take photographs inside polling places during the 2008 primaries (here, here, here), while others were not (see the photo above).

Besides local rules banning photography and videography, a number of state statutes also restrict activities at the polls and potentially limit your ability to use cameras and video equipment in and around polling places.  As Albert Masland of the Pennsylvania Department of State put it in a recent email to YouTube, "While there is not a single [Pennsylvania] statute . . . that explicitly prohibits the use of electronic devices in the polling place, there is a web of statutes that makes it anything but clearly legal."

First, Pennsylvania law strives to maintain secrecy in voting, a requirement enshrined in Article VII, section 4 of the Pennsylvania Constitution.  Reflecting this concern for secrecy, section 3530 of Title 25 of the Pennsylvania Statutes restricts activities that may reveal the contents of a voter's ballot.  This provision makes it a misdemeanor for a voter to "allow his ballot or the face of the voting machine voted by him to be seen by any person with apparent intention of letting it be known how he is about to vote."  This language does not cover posting an image of one's own marked ballot on the Internet after voting, but it would likely cover streaming live video at the time of voting. Section 3530 also prohibits "endeavor[ing] to induce any elector before depositing his ballot to show how he marks or has marked his ballot."  This makes it unlawful to photograph or film other voters in such a way that might reveal the contents of their ballots.

Second, Pennsylvania law protects voters from intimidation and interference, and the relevant provisions could affect your ability to use cameras or video equipment inside a polling place.  Section 3530, discussed above, also prohibits "interfer[ing] with any elector when inside the enclosed space or when marking his ballot, or preparing the voting machine for voting."  In addition, section 3547 makes it a crime to "practice intimidation or coercion" to compel someone to vote or refrain from voting, or to "impede[], prevent[], or otherwise interfere[] with the free exercise of the elective franchise by any voter."  You may not view your use of a camera or video recorder as intimidating, but other voters and election officials may well view it that way, and their discomfort is likely to be more acute if you film inside.

Third, Pennsylvania law strictly regulates activities in and around the polling place with a view towards maintaining order. For instance, section 3060(a) of Title 25 limits the number of voters inside the polling place to ten individuals, and section 3060(b) prohibits re-entry.  Inside, section 3057 limits a voter's time in the voting compartment or booth to three minutes. Section 3060(d) prohibits anyone other than voters and certain officials from coming within 10 feet of the polling place.  Unless you are in the process of voting, you should therefore steer clear of this area for any purpose.  Outside this zone, the law permits you to film, take photographs, and interview other voters (with permission), as long as you are not on someone's private property, and subject to the prohibitions on voter intimidation and interference discussed above.

This post is part of our series looking at state election laws that regulate activities at polling places on Election Day.  We cover these laws from a general standpoint in the Documenting Your Vote section of our legal guide. As always, we'd love the help of our readers with our election law research.  If you know of any cases interpreting Pennsylvania law on these issues, please let us know in the comments.  And, if you've got input on election laws in other states, please leave a comment or contact us directly.