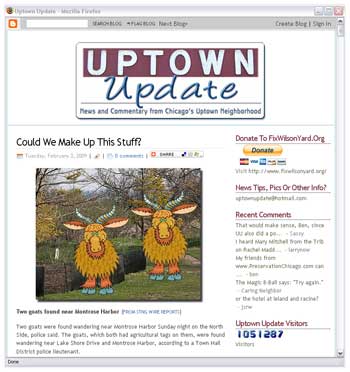 We are still trying to get to the bottom of this one, but it appears that a real estate developer in Chicago has subpoenaed information from four websites that have criticized efforts to redevelop Wilson Yard in downtown Chicago.  The redevelopment work is the subject of a lawsuit filed in December 2008 by community group Fix Wilson Yard against Peter Holsten's development company and the City of Chicago.

According to press accounts, Holsten's company sent a subpoena last month to Google, which hosts the Uptown Update and What the Helen blogs on its Blogger.com service, demanding that it provide "all the information for [the] two particular sites."

It is not clear what connection the blogs have to the lawsuit.  However, both blogs are known as Uptown-related watchdog sites: Uptown Update discusses a wide range of information regarding the Uptown area, while What the Helen (now defunct) focused on the 2007 election campaign of Uptown alderman Helen Schiller.

The neighborhood organizations are being asked to produce all posts in "the form of a blog, chat room comment, website (sic) post or any other form that relates to the Wilson Yard development, Alderman [Helen] Shiller, or Uptown development."

In addition, the subpoenas ask for all documents pertaining to the six Uptown residents named as plaintiffs in the Fix Wilson Yard lawsuit.

Neither the blog sites nor Buena Park Neighbors are affiliated with Fix Wilson Yard or its lawsuit. Katharine Boyda, the current president of the Uptown Neighborhood Council, which was originally formed to oppose the Wilson Yard development, is one of the resident-plaintiffs named in the lawsuit.

Fortunately, the Electronic Frontier Foundation (EFF) has agreed to represent both neighborhood blogs and the Buena Park Neighbors in their legal fight to quash the subpoenas.  Matt Zimmerman, a senior staff attorney for EFF told the News-Star that the subpoenas were "overreaching."

"I think there is a temptation of litigators in casting a pretty broad net to find as much information as they can," Zimmerman said. "The First Amendment provides pretty clear limitations on litigants and what information they can obtain about the identities of people exercising their First Amendment rights. This case even more squarely falls into the First Amendment category because these are Web sites that people are commenting on matters of public importance concerning this development."

Zimmerman also said that Holsten's attorney had extended the February 4, 2009 return date for the subpoenas so the parties can discuss the requests.

For more information on the subpoenas, see our legal threats database entry, Holsten v. Uptown Update and What the Helen.

I'm glad to see that Berkman is taking notice of this and that EFF has agreed to defned these websites. As an HLS alumn who lives in this neighborhood and has been following this Wilson Yard debacle for countless years, all I can say is it isn't shocking that this tactic is being used to try to stifle public comment. Uptown Update would not exist but for the void created by the failure of local leadership to effectively communicate and engage the public in the activities of this Chicago neigbhorhood. Uptown Update does a great job, but I think even they would admit that part of their success has been due to the fact that they were the first to offer real food to people who have been starving for years, if you will. If you want to get to the bottom of this, beyond the dynamics of this neighborhood (some of which I mention above), you need to look into the corruption that is the TIF system in Illinois (particularly Chicago). This is about money and influence.