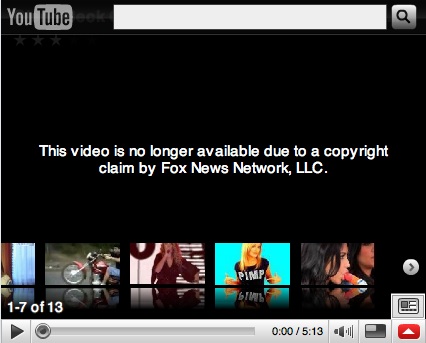 Like many former newspaper employees, I hate the 24-hour "news" networks.  Be it Fox News, MSNBC, or CNN, I think they're just across-the-board awful.  The only time I'll pay any attention to them is in the midst of some event that demands real-time attention, say a presidential election or a terrorist attack (and even then, I may just switch to BBC coverage instead).  Other than in those situations, the news channels are just echo chambers for the dreck spewed by your Becks, O'Reillys, Dobbses, and Olbermenn.

That dreck fuels a great deal of the blogosphere, of course.  Any number of political websites out there take the most offensive, ridiculous samples of bloviation and criticize/herald it in time-honored First Amendment tradition.  Indeed, the political blogosphere thrives on clips from these news channel programs.  Which makes Fox News' recent DCMA-bombing of one of the key left-wing YouTube channels serving up such clips so interesting.

According to Gawker, Fox issued some 150 DMCA takedowns to the News1News channel, which high-profile lefty blogs — such as the Huffington Post, Mediaite, Truthdig, and indeed Gawker itself — use as a source for the Beck/O'Reilly snippets that they want to ridicule.  As a result, YouTube, which has a three-strikes DMCA policy, shut down the News1News channel completely, leaving pinko blogs everywhere at a loss. Although not for long, Gawker notes. News1News relaunched under a new name, but apparently has already received a new round of takedowns from Fox. Fox miraculously spared various conservative YouTube channels from its DMCA assault, despite their posting of the same or similar content.

What I find most interesting in this case is not Fox's barefaced attempt to shut up its critics.  Who didn't expect that?  And Fox is arguably within its rights to assert copyright infringement against News1News.  But what I find interesting is how News1News' video-clipping "service" squares with fair use.

Generally speaking, many cases of fair use involve a single entity publishing both an excerpt of someone else's work and some sort of criticism or commentary on that work. Certainly, this is how it tends to happen in print or traditional audiovisual media.  Take, for example, Time Inc. v. Bernard Geis Associates, 293 F.Supp. 130 (D.C.N.Y. 1968), in which fair use protected the publisher of a book containing stills from the Zapruder film of President Kennedy's assassination from a copyright infringement suit brought by Time Inc., which owned the rights in the film. As is inherent for printed material, the book contained both the copyrighted content and the commentary upon that content.  The publisher was the single source of the publication, if you will.

Fair use publication on the Internet can also follow such a single-source model.  It happened a few weeks ago when Boing Boing reposted a photo of a freakishly photoshopped Ralph Lauren model and noted just how freakishly photoshopped she was.  Both the photo and the webpage containing the commentary upon the photo are hosted by the Boing Boing server: thus, they were published from a single source.

What's interesting about the News1News situation is that the channel posting the Fox excerpts is not the party commenting on them (the liberal bloggers fulfill that role).  This makes it more difficult to say whether News1News has a good fair use defense.

Now, the blogs using News1News clips are perfectly safe from copyright claims, because they do not reproduce or distribute the clips themselves (they're just using the embed code).  Even if Fox were somehow able to make out an infringement claim (but see Perfect 10 v. Google Inc.), their commentary on the clips would likely make the whole affair a fair use.

But as far as I'm aware, News1News did not itself include any sort of commentary along with the clips it hosted.  But, it also appears that the videos had no purpose other than to be fodder for commentary by others.  Thus, News1News appears to be encouraging a dual-source publication of fair use commentary: it would provide the clips to be commented upon, and tacitly invited bloggers to supply the comments needed to create a single, whole fair use publication.

As a result, I wonder: if the issue goes to court, can News1News successfully invoke fair use?  I'd think that News1News would have a reasonable, though novel argument in this regard.  While News1News did not create any critical commentary itself, it clearly intended its clips to provide raw materials for such commentary.  And while I'm sure Fox News doesn't see it this way, News1News' clips arguably further copyright's core purpose to "promote the Progress of Science and useful Arts" by encouraging commentary.

It's an interesting situation, and one quite peculiar to the Internet.  Nowhere else could you separate the source of copyrighted material from the source of commentary in the same way.  I'm not aware of anything quite like it being litigated before.  With Fox going after the new News1News account, maybe we can look forward to a legal showdown on this question in the future.