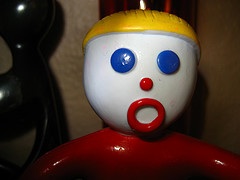 Well, Germany's recently formed government believes they may have a solution to the woes of German publishers: a new kind of copyright.  The New York Times reports that the incoming German government has proposed a new kind of "neighboring right" (i.e., "ancillary copyright" or Leistungsschutzrecht), along the lines of those already enjoyed by movie and music publishers in Europe, to stymie the unauthorized use of published works by for-profit websites:

Details of how the proposal would work have not been spelled out, but publishing executives say one possibility would be to require a license for any commercial use of published material online. That might include Web sites that post articles from other sources, assuming they sell advertising.

A new agency, modeled on the music and book industries’ royalty collection societies, could be created to gather and distribute the fees, publishing executives add.

Private, noncommercial use of news articles would remain unrestricted under the proposals publishers are discussing. (Source)

It sounds as though the German government is proposing a system modeled upon the lines of music licensers ASCAP and BMI.  Basically, any online, for-profit website would have to pay this new agency for any published content that it reprints, and the agency would pass along payments to the original creators.

Of course, this proposal poses a number of hairy problems right off the bat.  First and foremost is the difficulty in distinguishing a for-profit website from an "amateur" one.  There are an awful lot of blogs that do host ads in order to bring in a modest bit of revenue, which — if they're lucky — will offset basic operating costs.  Do they count as "commercial"?  It's not as if whatever meager hits they may draw are really sucking money out of publishers — we're talking pennies (or Euro cents) at most, surely.  Will it really improve the fortunes of publishers if this agency cracks down on these de minimis "commercial" websites?

Further, the proposal implies that published works can be managed analogously to music and movies.  But that's not exactly a safe assumption.  Generally, those users of music and movies who get the relevant industries bent out of shape don't do so in a piecemeal fashion.  Rather, they duplicate entire works: all four minutes of a song, or all 120 minutes of a movie.  There's not much use for fractional copies of these kind of audio or multimedia works.  But published works are another matter.  While there certainly are websites that replicate entire stories (and they should indeed be paying for those stories), there are also plenty that only reprint a small portion of the original text.  Heck, look at this blog post — I used three paragraphs from The New York Times above.  If I were using three grafs from Der Spiegel instead, would I be required to shell out a few Euros to this proposed agency?  Would it matter that the CMLP doesn't have ads?  What if it did?

And obviously, this same concern leads to the issue of fair use.  I'm not sure what the precise status of fair use is in Germany, but after a little web research, I'm under the impression that Germany offers limited fair use protections to noncommercial websites.  At the very least, fair use in Germany (and Europe generally) is nowhere near as strong as it is in the US, where at least one of the sites that German publishers complain about (*cough*Google*cough*) is based.  If German content owners starts pursuing licensing claims against US content publishers, we could be in for a lot of international bumping of judicial heads.

Frankly, even if those issues were worked out such that independent bloggers were protected, I just don't see this sort of state intervention making much difference in publishers' bottom lines.  As German blogger Markus Beckedahl tells the Times, “This debate is happening only because German publishers have failed to build successful business models on the Internet.”  And indeed, that's true of publishers around the world.  The reason why they aren't doing well isn't because a bunch of little websites are quoting their content; it's because they're relying on a business model that just doesn't work any more.

This German agency could, perhaps, staunch publishers' bleeding slightly, but overall, it's just delaying the inevitable.  Publishers either need to completely revise their business model, or be prepared to close up shop.  And the Germans aren't doing anyone any favors by implementing a system that could drive the little guys out of the information business by assessing licensing fees against them.  Those little guys may be the only ones left standing after the publishing giants tank, and they might just lead the way forward for journalism.