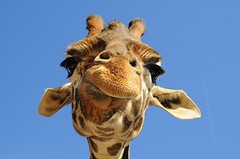 On March 2, without a hearing, Judge Brenda Bedsole Ricks of the 21st Judicial District Court in Amite, Louisiana granted Global Wildlife Center a temporary restraining order requiring Brilleaux to remove the story from his site. Yesterday, District Judge Beth Wolfe held a hearing on Global Wildlife's request to convert the order into a preliminary injunction. Judge Wolfe not only refused the injunction and dissolved the TRO, but ordered Global Wildlife to pay Brilleaux $500 in attorneys' fees and court costs, according to newstimes.com.

We don't have a transcript of yesterday's hearing, so the details of the decision are kind of sketchy.  But, it sounds like Judge Wolfe agreed with the argument, put forward by Brilleaux as well as the ACLU in its amicus brief, that the First Amendment protects satirical speech like the giraffe-attack article. Stated differently, in a defamation case like this one, liability cannot be based on statements that a reasonable reader would not understand as stating actual facts about the plaintiff.

Brilleaux's site, Hammond Action News, publishes Onion-style fake news stories about regional happenings in the Hammond area northwest of New Orleans. The article in question, published in February 2010, related the tale of a "rogue giraffe" at Global Wildlife Center that supposedly attacked and killed "[v]eteran wildlife guide Dizzy Dimarco." (The post came a day after an orca whale killed a trainer at Sea World during a public performance, causing a media sensation.) As Bruce Carton of Legal Blog Watch described Brilleaux's post,  "[w]hether you find it funny or not, the post contains innumerable clues (e.g., an invitation to watch 'an upcoming FPTV Channel 17 special. WHEN GOOD GIRAFFES GO BAD') that the post is a joke, beyond the clear disclaimer that the site is satirical."  Ken from Popehat put it a little more bluntly when he wrote, "anyone who reads that article and thinks it is real is too stupid to be trusted around animals."

It sounds like, at yesterday's hearing, Judge Wolfe largely agreed with these assessments of the article, commenting "I don't think there is any malice of intent from either party . . . I think the bottom line is: This is protected."  According to newstimes.com, Brilleaux said after the hearing that he would repost the article to his blog.

It's worth noting that the March 2 temporary restraining order was constitutionally suspect not just because of the satirical nature of Brilleaux's speech.  Judge Ricks' previous order plainly was a prior restraint on speech, "the most serious and the least tolerable infringement on First Amendment rights." Nebraska Press Ass'n v. Stuart, 427 U.S. 539, 559 (1976). Even assuming the article were defamatory, the appropriate remedy would be money damages (or, maybe, an extremely narrowly tailored injunction) after a full trial on the merits, not a provisional order to take the post down made without the benefit of a hearing.  We're glad to see that Judge Wolfe got it right.