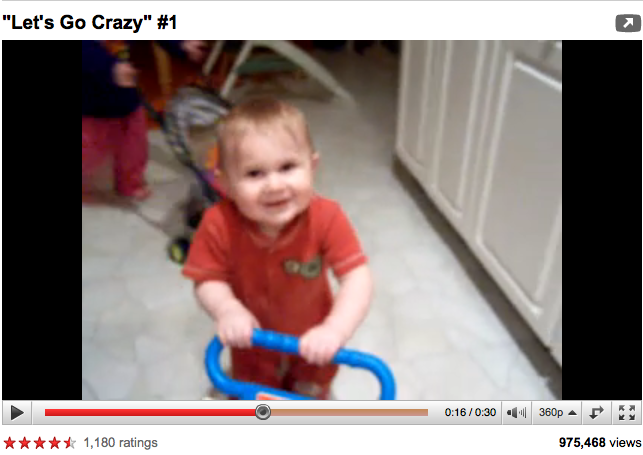 Last week, federal district judge Jeremy Fogel issued a technical but important decision in Stephanie Lenz's lawsuit against Universal Music over the "Let's Go Crazy" dancing baby takedown.  As Eric Goldman points out, the decision is one of the few (if not the only) to weigh in on what damages are recoverable from a copyright owner who sends a bogus takedown in violation of 17 U.S.C. § 512(f).

In relevant part, section 512(f) provides that a copyright owner who makes knowing false statements in a takedown notice "shall be liable for any damages, including costs and attorneys’ fees, incurred by [by the 512(f) plaintiff] as the result of the service provider relying upon such misrepresentation in removing or disabling access to the material or activity claimed to be infringing."

The court interpreted "any damages" broadly to include any harm proximately caused by the wrongful takedown, including non-economic damages for violation/chilling of First Amendment rights.  This might seem like a big victory for Lenz and her ilk, but it's largely symbolic.  As Ben Sheffner puts it (somewhat uncharitably, but nonetheless incisively):

But I don't see how Lenz suffered more than nominal losses here; she was simply annoyed that her video (hosted for free by YouTube) was temporarily removed, and she found some lawyers/activists who jumped at the chance to make a federal case out of it.

I can't imagine that other, future cases are going to involve much more in the way of injury that any ordinary jury will be interested in compensating. But, of course, victims of wrongful takedowns do commonly suffer direct economic injury, like legal fees associated with evaluating the takedown notice and filing a counter-notice. No mental gymnastics were required for Judge Fogel to find these costs covered by the statute.  So, Lenz's attorneys' fees incurred prior to filing her 512(f) claim are recoverable under the statute, assuming she ultimately makes out her case on the merits (a not insubstantial caveat).

But the big-ticket issue was whether attorneys' fees incurred after filing the 512(f) lawsuit are recoverable.  Here, Judge Fogel interpreted the statute to exclude such fees, in part because these fees are not causally connected to the takedown but to the plaintiff's own lawsuit, and in part because the Copyright Act already has a fee-shifting provision, 17 U.S.C. § 505, which allows a court, in its discretion, to award a prevailing party attorneys' fees in copyright cases.  While not entirely surprising and hard to disagree with as a matter of statutory interpretation, this ruling may drain much of the force out of 512(f) as a practical deterrent to abusive takedowns because automatic, post-suit attorneys' fees are the only item of damages that could foreseeably get big enough to make big content owners uncomfortable.

When you add this to the requirement (on the merits) that a 512(f) plaintiff show that the copyright owner acted with subjective bad faith in sending the takedown, it's easy to see, as Goldman says, that 512's utility "may be limited in practice":

Not only must the 512(f) plaintiff overcome the Rossi case, which effectively mooted claims for erroneous takedown notices, but this ruling illustrates how hard 512(f) plaintiffs have to work to find compensable damages. We don't see many 512(f) cases being brought. Watching this case, it's easy to see why.

This point was not lost on Judge Fogel, who suggested (with the help of some scholarly commentary) that Congress likely intended the extra-judicial counter-notice procedure, not 512(f), to provide the primary mechanism for dealing with abusive takedowns.