It is a good thing to want to protect children from the vulgarity of the world. Accordingly, states have adopted prohibitions on exhibiting or selling harmful material to minors. These laws make sense, in that we usually don’t want sex shops selling pornography to kids. But occasionally the legislature goes a bit insane and decides that, in order to fully protect the children, we need to criminalize or block off whole sections of the Internet.

Massachusetts recently changed its “harmful to minors” law (Mass. Gen. Laws ch. 272, § 31) to include information hosted on the Internet:

“Matter”, any handwritten or printed material, visual representation, live performance or sound recording including, but not limited to, books, magazines, motion picture films, pamphlets, phonographic records, pictures, photographs, figures, statues, plays, dances, or any electronic communication including, but not limited to, electronic mail, instant messages, text messages, and any other communication created by means of use of the Internet or wireless network, whether by computer, telephone, or any other device or by any transfer of signs, signals, writing, images, sounds, data, or intelligence of any nature transmitted in whole or in part by a wire, radio, electromagnetic, photo-electronic or photo-optical system.

2010 Mass. Acts ch. 74, § 2. The ACLU has already challenged the law. I predict that Massachusetts is about to get spanked on its inviting, taut little buns (in case the law remains in effect, I mean spanked in a non-sexual way — if you are a minor please do not turn me in).

This definitional expansion was not a good idea for many, many reasons:

First off, this approach threatens to criminalize huge swaths of the Internet because there is no easy way to ensure that one's risqué material is not viewed by minors. See failed attempts to require the use of real names or other identifiers online (that is, outside of South Korea).  The only way to be safe would be to make sure that your content was rated PG (and I don’t know about you but I sometimes enjoy the occasional swear or comment on taut buns, see supra). This PG restriction of course would amount to censorship of constitutionally protected speech.

Secondly, it seems to me that the Supreme Court already hinted in Reno v. ACLU, 521 U.S. 844 (1997), that this sort of thing is unconstitutional. There, the Court struck down sections of the Communication Decency Act of 1996, which imposed criminal sanctions on anyone who:

knowingly (A) uses an interactive computer service to send to a specific person or persons under 18 years of age, or (B) uses any interactive computer service to display in a manner available to a person under 18 years of age, any comment, request, suggestion, proposal, image, or other communication that, in context, depicts or describes, in terms patently offensive as measured by contemporary community standards, sexual or excretory activities or organs.

Thirdly, the Massachusetts legislature has apparently misunderstood the scope of the Internet. Whereas the previous “harmful to minors” language contemplated sex shops with physical locations serving Massachusetts minors, the new law reaches the entire country. Surely, Massachusetts does not have the right to regulate businesses located in other states, especially provided that those businesses are not specifically targeting Massachusetts residents.

Fourthly, the law will provide another tool for bogus takedowns of otherwise lawful content, à la the DMCA. If I don’t much care for the content of your site, it would be virtually costless for me to turn you in and exclaim loudly “Won’t someone please think of the children!”

Lastly, this law comes at a time when the United States is exerting pressure on her allies to refrain from adopting similar “protect the children” Internet prohibitions. The Australians recently delayed turning on their giant Big Brother is Watching You Internet Filter for a least one year, due in part to extraordinary condemnation from the U.S. government and businesses. (Good job not being evil Google).

As always, I try to ascribe these sorts of bills to carelessness or stupidity rather than hubris. The inclusion of “text messages” makes me think that this law is actually an anti-sexting law along the lines of the prohibitions in Ohio and Illinois. If this is the case, the legislature might want to withdraw the insanely swollen language in favor of a more tailored, form fitting, and supple solution to this problem.

UPDATE: A reader has clued me in as to the motivation of the Mass. Legislature : "It was less an attempt to prevent sexting than a reaction to the acquittal of an accused sexual predator by the SJC." Though this would not cure the constitutional defects of this law, this fact better explains the texting provision.

(Andrew Moshirnia is a rising third year at Harvard Law School. He believes that parts of the human body, practical as they may be, are evil!) 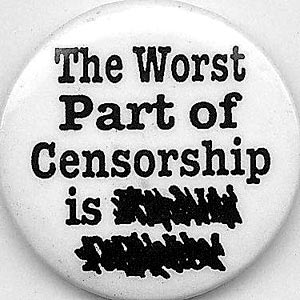