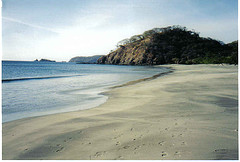 If you've been living in Boston, you've undoubtedly heard the recent uproar over a local website publishing a photo of Ben Brady, the 20-month-old son of New England Patriots quarterback Tom Brady and supermodel Gisele Budchen, playing with his parents on a Costa Rican beach. The public furor arises from two points: 1) Baby Brady was in the buff, and 2) David Portnoy, the author and publisher of the blog, used the photo to comment on the size of the kid's, shall we say, natural gifts.

I wish Portnoy presented a more sympathetic case to discuss. The fact that he published a photo of Tom Brady's toddler boy with commentary on the baby's package makes the entire situation feel creepy, icky and, well, uncomfortable to talk about.

It's unfortunate, because it overshadows the legally dubious reason why Portnoy eventually removed the content from his blog after days of defending himself to the public: detectives sent by the Massachusetts Attorney General's office showed up at his house last week and asked him to do so, despite the likelihood that Portnoy's actions are legal and his speech protected.

If you've yet to hear about the story, here's some background. Per the Boston Herald, David Portnoy published on his blog, Barstool Sports, a magnified picture of Baby Brady in a post titled, "Check Out the Howitzer on Brady's Kid." For those unfamiliar with Barstool Sports, the publication prides itself on its sophomoric humor and photo galleries of local bombshells. And sophomoric humor is what Portnoy says he was going for.

"To me anybody with a normally functioning brain should have looked at this blog, hopefully laughed, and moved on," wrote an unapologetic Portnoy. "To say there was any sexual intent or innuendo behind it is flat out ludicrous. It was a blog about Tom Brady and him being awesome at everything he does...."

These feelings, however, seem to be founded more in the public's disgust of the photo's publication than in the law.

Under federal law,  it is illegal to possess or distribute child pornography. 18 U.S.C. § 2252. Child pornography includes any visual depiction of sexually explicit conduct involving a minor. 18 U.S.C. § 2256(8). "Sexually explicit conduct" includes the "graphic or simulated lascivious exhibition of the genitals or pubic area of any person." 18 U.S.C. § 2256(2)(B). Massachusetts has a similar child pornography statute which requires "lascivious intent" when disseminating the material. M.G.L. c. 272 § 29B. Such intent is found by considering several factors, including "whether the focal point of a visual depiction is the child's genitalia, pubic area, or breast area of a female child." M.G.L. c. 272 § 31. Simply, child pornography involves either the depiction of a minor engaged in sexual activity or the showing of a minor's genitals in a lascivious way.

Neither seems to apply here. Although the baby's bigness was the focal point of the photo, such a consideration is just one of many made under the Massachusetts statute. Further, given the publication's audience and Portnoy's explanation, the intent seems clear, if not misguided: making an off-color joke about Tom Brady's talent, which apparently includes breeding well-endowed children, and using a photo of his son to do so.

Though Massachusetts Attorney General Martha Coakley called the photo "troubling, to say the least," no charges were filed against Portnoy. After an initial investigation, she apparently understood the joke, even if she wasn't laughing.

Still, when law enforcement arrived at Portnoy's home, officers asked him to remove the photos, a concerning development regardless of how offensive they may be.

"...[T]he state cops paid me a visit Friday night," Portnoy wrote. "They were friendly, non-threatening and basically just said they were getting lots of complaints from the lunatic fringe... and it would be in the best interest of everybody involved if I'd just take them down."

While an initial investigation may have been justified, there should have been no further action made by the state once it determined that a crime did not occur. Receiving "numerous complaints" is not an adequate reason for law enforcement to pressure a publisher into removing content from his website. Coakley's office may claim that it acted in everyone's best interest, but whose interest exactly is being served by the state pressuring an individual to stop speaking despite his right to do so?

Replace Portnoy with a more traditional journalist and substitute his raunchy website with a more mainstream publication. This type of interference by the state would never be tolerated. The fact that the content at issue here is distasteful is unfortunate, but also irrelevant. If it doesn't qualify as child pornography, it's almost certainly protected under the First Amendment. As observed by The SmokingGun.com, "the state's top law enforcement officer is policing matters of taste/journalistic propriety" on the Internet.

Massachusetts media lawyer Jonathan Albano told The Boston Globe that he "think[s] it's a real stretch that this is a criminal matter... and there's an inherent element of coercion when civilians are faced with police in uniforms." Portnoy did write that the police were "friendly" and said the whole situation was "not the cops fault." But as to their request that he remove the photo, he added, "when staties show up at your door, it's hard to say no."