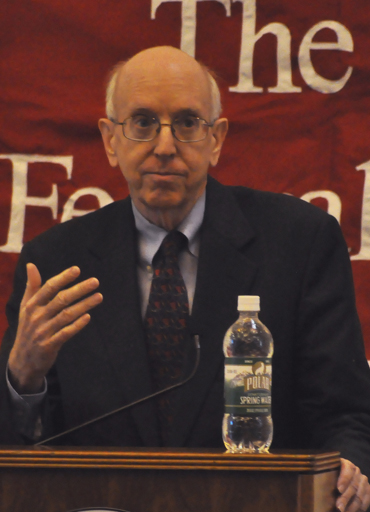 In what is now their widely publicized exchange, U.S. Seventh Circuit Judge Richard Posner took attorney Richard O'Brien to task last week for arguing that the Illinois eavesdropping statute should be stricken as unconstitutional (audio here). The statute criminalizes the audio recording of non-consenting parties, even if they are public officials conducting official business in public view.

"Once all this stuff can be recorded, there's going to be a lot more of this snooping around by reporters and bloggers."

"Is that a bad thing, your honor?"

"Yes, it is a bad thing. There is such a thing as privacy."

About a month after the U.S. Court of Appeals for the First Circuit declared the public recording of police to be a basic, vital, and well-established liberty, the American Civil Liberties Union of Illinois is now fighting to preserve that freedom in ACLU v. Alvarez (in which the CMLP has filed an amicus brief). During last week's arguments, the critical and often snarky judge not only said that an increased surveillance of public officials is a "bad thing" but also expressed concern about "snoopers" interfering with investigations courtesy of curiosity and a tape recorder. Posner's apparent belief that there should be an expectation of privacy for those in public areas discussing matters of public concern is alarming given that it is squarely at odds with the First Amendment. Worse, Posner's comments smack of condescension for journalists.

Posner's worry about the privacy of citizens is misplaced as the First Amendment focuses on issues of public concern. States are generally allowed to limit the dissemination of facts that are private in nature. As for preserving the efficiency of law enforcement, O'Brien explained that the First Amendment allows for ways police can conduct their business without any unnecessary interference. Time, place, and manner restrictions, he said, are one example.

What is often lost in these recent debates over eavesdropping or wiretapping statutes is why such public oversight is necessary at all. Talented attorneys like O'Brien can wax eloquent about First Amendment virtues, but these fundamental legal principles don't always tell the story. The majority of concerned citizens with a cell phone camera couldn't care less about Glik v. Cunniffe (in which the CMLP also filed an amicus brief) or other supportive caselaw. They instead care about preventing the excessive force Glik witnessed. They care about protecting themselves.

Take Tiawanda Moore, one of those being prosecuted under the Illinois statute, for example. Chicago police answered a domestic disturbance call at Moore's home last year,  explains Radley Balko at The Huffington Post. While being interviewed by the police in her bedroom, Moore alleges that an officer groped her and then slipped her his phone number. When she went to report the incident to the internal affairs department at the Chicago Police, officials there gave her the run-around and began to discourage her from making any claims against the officer. So, as a protective measure, she began to secretly record her conversations with the investigators. When police found out about the recordings, they arrested her under the eavesdropping statute.

According to the ACLU's complaint, at least nine individuals including Moore have been prosecuted in Illinois for doing nothing other than audio recording on-duty police. One defendant led a program of monitoring law enforcement specifically to promote police accountability. Another faced up to 15 years in prison because he recorded the police as they arrested him for selling art on the street without a permit. Is this a bunch of needless snooping as Posner suggests?

No, this is a matter of protection that brings to mind the answer to an age-old question: "Quis custodiet ipsos custodes?", i.e. "Who guards the guards?" or "Who watches the watchmen?"

The answer is all of us. We may not all carry a press pass, but thanks to the technology in our backpocket, we can all document police misconduct. Or in the words of Posner, snoop. This is a frightening thought to those in power. As Jeff Jarvis writes in the opening to his book Public Parts, "publicness is an emblem of epochal change. It is profoundly disruptive. Publicness threatens institutions whose power is invested in the control of information and audiences... Publicness is a sign of our empowerment at their expense."

No doubt there are privacy concerns — "Who knows who is lurking," Posner said, "who is looking for embarrassing material to broadcast" — but the First Amendment allows for those interests to be protected too. O'Brien made this clear in his final exchange with Posner.

"What if you had a couple walking down the street in Chicago, the streets are crowded and they are talking about sex. And someone walks up next to them with a recorder and records their conversation and then gives it to YouTube or something and it is broadcast all around the world."

"Not a public official. Not speech of public concern. The First Amendment isn't implicated in your hypothetical your honor."

Ultimately, this debate is about accountability and protection. The Los Angeles Times reported last week the story of David Gipson who police arrested and charged with possession of a concealed firearm. He was acquitted after jurors viewed a video of the arrest that showed not only inconsistencies in the officers' testimony, but in the words of one juror, "outright fabrications." Said the juror, "It'll be an injustice... if someone isn't held accountable."

If Gipson's story had unfolded in Illinois, the bystander who recorded his arrest may not have raised his camera for fear of being arrested. Gipson may still be in jail and the officers who testified against him may feel even more empowered to conceal the truth following future arrests.

If police are not held accountable for their misconduct, such misconduct will undoubtedly continue. The best way to prevent this from occuring is to document such incidents when they do occur. Whether they are labeled journalists, bloggers, or snoopers, it is ultimately the guarded who must watch the guards. Posner's contempt for this reality is disheartening.