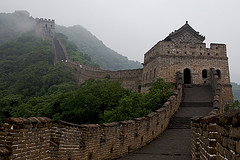 Censorship in China is nothing new.  Heck, it's practically to be expected these days. Witness last week's censoring of the Shanghai stock exchange's 64.89 point drop on June 4.  See, that number is already on the Great Firewall of China's blacklist because it happens to coincide with the date of the Tiananmen Square massacre, 6/4/89.  That the drop happened to occur on June 4, the 23rd anniversary of the massacre, well, that's just one of life's rich little ironies.  And it caused havoc, as the censors felt compelled to crack down on any mention of the perfectly legitimate stock market results.  And any mention of the stock market, in fact.  It'd be funny if it weren't so sad.

Now, China's Twitter-like microblog Sina Weibo is threatening to up the censorship ante with a new policy that cracks down on "untrue" content, reports the International Business Times.  This new system comes in the guise of a new point system.  Upon creating a Sina Weibo account, users are given 80 points (or 100 points if they set up their account using their government-assigned ID number).  Subsequently, each "falsehood" that the user communicates to the larger community results in a point loss, with broader communication leading to greater losses.

Once the point total falls below 60, the user is flagged as "low-credit." A loss of all points will result in an account's closure.

Voice of America adds that users can also gain points by staying in compliance with government censorship policies.

The timing of the new Sina Weibo policy is not particularly surprising, as China has been rocked by several scandals recently, details of which have spread so quickly online as to remain outside the government's ability to control.  Specifically, the fall from grace of high-ranking politician Bo Xilai has spurred much online gossiping, complete with sordid details of sex, murder, and corruption. And that's to say nothing of the rather sensational escape of lawyer Chen Guangcheng from house arrest to the US embassy – made no less dramatic and embarrassing for the Chinese government by the fact that Mr. Chen is blind.  Sina Weibo's new "truth credit" policy is meant to staunch the flow of such scandalmongering, writes IBT. (Nevermind that much of what makes these particular scandals so scandalous is their truth.)

Let us put aside rumormongering about "scandals" that also happen to have happened (which US law would constitutionally protect, since the travails of Mr. Bo and Mr. Chen are clearly of public interest), though. Obviously, that's of concern, but the real danger of this new policy comes from the effect it will have on the reporting of more mundane, though no less important news that the government would just assume not be examined.

Consider last summer's bullet train accident in Wenzhou, in which dozens were killed and hundreds injured.  When the accident occurred, officials tried to bury the story – at one point quite literally, when they attempted to bury part of the train wreckage.  But Sina Weibo served as a means to spread both information in the accident's aftermath and criticism of the government's failure to prevent the accident and its subsequent coverup attempts.  Because of the online chatter about the accident, the government was forced to respond to the problems that the accident highlighted, rather than brush them under the rug.

But what if the bullet-train accident or a similar sort of event happened under this new Sina Weibo policy? The problem appears twofold.

First, there's the obvious disincentive to Sina Weibo users to comment on a crisis for fear of such comments being declared "untrue." Certainly, this will cut down on the amount of false communication on Sina Weibo.  But it will also cut down on true communication, as users will not want to risk losing points for spreading information that they could not verify.  So the sort of public pressure that was brought to bear after the bullet-train accident would not occur, as the communication to the public about the issue would never reach critical mass.

(I should note that this assumes that points prove valuable and their loss harms the user, it should be said.  It's possible that creating a new Sina Weibo account is so easy as to make point- and account-loss a negligible disincentive.  But I think it's safe to assume the point-loss is a disincentive, for otherwise Sina Weibo wouldn't have implemented their policy.)

Second, even if brave Sina Weibo users decide to post about the incident of public import, there's the problem of what's "true." Sina Weibo's policy enforcers are presumably incentivized to crack down on anything that looks like a possible "untruth."  Given the Chinese government's strict controls on news, it's difficult to see how Sina Weibo will determine what the truth actually is.  As such, one can expect Sina Weibo to censor anything that doesn't follow the party line.

Unfortunately, that makes it all the more likely that Sina Weibo will censor not based on "truth," but rather on conformity. It is unclear how, for example, if a user has proof of the government burying part of the bullet train wreckage that she is communicating about, that proof will stand up to government statements to the contrary.  That's not to say Sina Weibo will act in bad faith.  Rather, the government's media outlets have a monopoly on news, and Sina Weibo will most likely have to rely on government reports to determine what is "true."  And in doing so, they reinforce that "truth," regardless of its actual veracity.  This is certainly a detriment to citizen-journalist-style efforts to keep the government honest.

(And of course, one mustn't overlook that the policy specifically punishes anonymous speech.   Anonymously created accounts start off with 80 points, as opposed to the 100 points given to those accounts associated with government ID numbers – thus, disincentiving whistleblowing in a further strike against keeping the government honest.)

Of course, as always, the devil is in the details of how this "truth point" system functions.  If Sina Weibo is passively censoring and only responding to complaints about "untrue" comments, that is less threatening to China's online speech than if Sina Weibo is actively scanning user content for noncompliance with the government's official narrative.  We'll have to see how the system actually works – and how difficult it is for China's savvy netizens to circumvent it – before we can fairly gauge the magnitude of its threat to online speech.

But regardless, the new Sina Weibo "truth credit" policy looks like it's only going to hurt efforts by users to communicate with each other about current events.  Whether it's well-intentioned or disingenuous, the policy disincentivizes too many tools that the public uses to keep itself informed: open communication (i.e., the marketplace of ideas), whistleblowing, independent verification of facts, etc. Ultimately, I suspect it's just another brick in the Firewall.