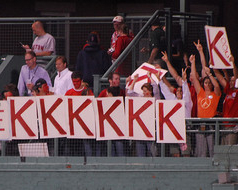 The nation's largest Internet service providers, in an unprecedented partnership with titans of the entertainment industry, have agreed to implement a uniform policy aimed at deterring online copyright infringement known as the Copyright Alert System. An agreement that sets forth extensive details about the program was finalized more than one year ago, but it has yet to take effect. Coverage of the scheme by Time and CNN has drawn attention back to the program in recent weeks. So, where exactly does the Copyright Alert System stand?

For those of you unfamiliar with the CAS, it is a graduated response approach to copyright enforcement created in an agreement between five major ISPs and representatives from the entertainment industry. Often referred to as the "six strikes" plan (for the number of warnings subscribers may receive), the program will result in a series of alerts that increase in seriousness if an Internet user's account is flagged by a content owner as one associated with the unauthorized sharing or downloading of copyrighted material via a peer-to-peer network.

In July 2011, AT&T, Cablevision, Comcast, Time Warner Cable, and Verizon entered into a Memorandum of Understanding with the Recording Industry Association of America and the Motion Picture Association of America. The MOU requires ISPs to send initial emails to account holders accused of downloading copyrighted content illegally. These emails must provide certain information, including means by which users can lawfully acquire copyrighted content online. Should the alleged infringement continue, participating ISPs will then compel users to acknowledge receipt of notices that may appear as pop-ups or landing pages within web browsers. "Mitigation measures," such as the reduction of Internet access speeds or compelled participation in an educational program on copyright, may be imposed in conjunction with the fourth or fifth notice. With the final notice, the ISP may impose further sanctions, and must notify the user that he or she may be subject to suit for copyright infringement.

When news of the agreement first broke, reports indicated that some ISPs would have the program up and running by late 2011. In September, the Center for Copyright Information website launched. The year came to a close, however, with no word as to whether any of the participating ISPs had made progress toward the implementation of systems that could meet the requirements of the MOU. A statement by RIAA Chairman and CEO Cary Sherman at a conference in March led many to believe that the first alerts would be issued to accused infringers beginning July 1. Shortly thereafter, TorrentFreak received word that the graduated response program may not be launched by ISPs until later this year.

The MOU provides little guidance as to when the program will go into effect, and establishes only an expiration date for the agreement (three years from now). The terms of the agreement indicate that ISPs were aiming to have the program take effect much sooner than it has, possibly within as few as three months of its execution date. ISPs, it appears, should have entered into a secondary agreement governing the implementation of the Copyright Alert System, and moved toward creating mechanisms to automate the program shortly thereafter. The CCI backtracked on these deadlines, and a spokesperson stated that such dates did not represent "hard deadlines," but rather were supposed to keep the parties "on track to having the system up and running as quickly as possible and in the most consumer friendly manner possible."

For the most part, ISPs have remained silent on copyright enforcement since the announcement of the CAS, and have largely declined to comment on their role in its implementation. Though not entirely clear, one possible reason for their silence could be the massive outrage over SOPA and PIPA during the winter months. It's possible that ISPs turned their attention to the legislation at that time; notably, the MOU provides that the enactment of a government-sponsored program may relieve signatories from responsibilities under the agreement. ISPs could be hesitant to set into motion a program that could strike the ire of customers.

Despite numerous delays, the parties to the MOU show no signs of abandoning the graduated response plan and appear to be moving forward with it. In April, the CCI announced that Jill Lesser would serve as its Executive Director and that the American Arbitration Association would implement and oversee the program's review process. Lesser recently told the Daily Dot that the parties to the MOU "are all very involved in internal planning and review of the alert system, which has been and will continue to be a collaborative process." She pointed to the desire to involve a third party arbitration service as another possible source of the holdups to date. A press contact for the CCI suggested that ISPs may launch later this year, "at potentially overlapping but different times."

Though recent statements do not point to a specific target launch date, it is clear from the MOU that ISPs must revise their terms of service prior to implementation and the issuance of alerts. For now, we may have to watch for ISP terms of service to change to identify when the program will take effect. Until then, there may be little (if any) guidance from the parties involved as to when users flagged as possible infringers will be given "strikes" under the program.

Natalie Nicol is an intern at the Digital Media Law Project and a rising 3L at UC Hastings College of the Law.