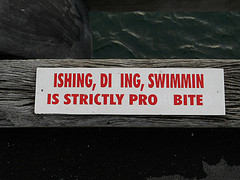 Last month, a federal magistrate judge in Massachusetts dismissed the lawsuit of Aaron Greenspan, a former classmate of Facebook founder Mark Zuckerberg, against Random House Publishing and Columbia Pictures (and others), the respective distributors of the 2009 book about Facebook's creation, "The Accidental Billionaires," and the film adaption, "The Social Network," in 2010.

Amid various copyright claims (which were also dismissed) was an interesting, "Is this really a legal thing?" claim of "defamation by omission." Greenspan basically argues that he was defamed when he was left out of the movie based on the book about Facebook because he claims that he was "indirectly" involved in the founding of the company. In his complaint, Greenspan alleges he was referred to as "Grossman" in the book, and completely left out of the film. And by being left out, he alleges that he was excluded from any recognition of his contributions, and that all these (complicated and diluted) matters have affected his "career prospects." Sounds like a slam-dunk for the "subject ridicule, shunning and abuse" element for a defamation claim, right?

Magistrate Judge Robert Collings of the United State District Court for the District of Massachusetts said, "[e]ssentially, Greenspan contends that the harm resulting from omissions was that he was robbed of his proper recognition for his role in the origins of Facebook; that is not a claim of defamation." Greenspan has since appealed his case to the First Circuit.

While Greenspan's indirect defamation claim was not strong, and may be even laughable, it is interesting to explore this issue of defamation by omission and what would be considered an actionable claim.

And while this makes some sense in theory, when you look deeper at the elements of defamation, things start to get squishy.

Now for your superquick defamation lesson for the day. Defamation is the general term for a legal claim involving injury to one's reputation.

The basic elements, which vary slightly from state to state, are that a defendant (1) published (2) a false statement of fact (3) about the plaintiff (4) that harmed the reputation of the plaintiff (not just insults, but that "exposes a person to hatred, ridicule or contempt"). The kicker is that it has to be published with (5) some level of fault (negligence if a private figure; or actual malice, that the reporter knew it was false and didn't care, for a public official).

Overwhelmingly though, most courts have dismissed these types of claims because judges have not wanted to invade editorial decision-making. In the cases below, reporters also left out certain facts from their publications, but editorial discretion was given more weight than the possible inferences of defamatory meaning:

Although most plaintiffs would prefer that the press publish their version of events, interference in editorial discretion raises constitutional questions. In the 1974 case of Miami-Herald v. Tornillo, the Supreme Court held that "the choice of material to go into a newspaper, and the decisions made as to limitations on the size and content of the paper, and treatment of public issues and public officials ‒ whether fair or unfair ‒ constitute the exercise of editorial control and judgment," and are protected by the First Amendment.

So what does this tell us about Greenspan's claim against the publishers? Greenspan's claim is  different because he was completely left out the movie.  In a 1974 case somewhat similiar to Greenspan's, a Massachusetts architect prevailed on his libel claim after a story reported another firm as responsible for the design of a certain housing project (even though they knew otherwise). In Sharatt v. Housing Innovations, Inc., the plaintiff argued that by not referencing him as the architect, it injured his professional reputation because he had represented himself to be the contracted architect among the business community. The Massachusetts Supreme Judicial Court found that even though the published statement was "innocent to the general public," the "attendant circumstances may be shown as proof of the defamatory nature of the words."

Even though the plaintiffs were not mentioned in these cases, the courts did not find the "of or concerning plaintiff" element of defamation to be dispositive, focusing instead on defamatory meaning and whether extrinsic facts would change readers' understanding.

On a final note, though it was only a small claim of his entire case, a claim like Greenspan's is still troubling. Defamation law should not create windfalls for people with de minimis involvement in a certain event, and for one reason or another are not mentioned in a news story or publication. There is not enough time or space in reporting and storytelling to give all the details and introduce entire casts of characters. Reporters, authors, and editors are tasked with synthesizing complex and complicated information in an understandable, compelling and truthful manner. They should not be sued for their editorial decisions.

Tabitha Messick is an intern at the Digital Media Law Project and a rising third-year at the University of North Carolina School of Law. She doesn't really care who directly or indirectly created Facebook.