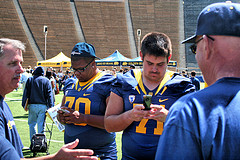 On Feb. 3, The New York Times' college sports blog "The Quad" reported about the flip side of my prior post on colleges limiting athletes' social media messages and postings: A bill currently pending in the Maryland state legislature would bar colleges from requiring athletes to allow school officials to monitor the athletes' social media activities. (Another bill (House version, Senate version) would place the same restriction on employers.)

While I previously wrote about the problems with public colleges placing limitations on athletes' messages, postings, and tweets, I actually have some sympathy for university administrators trying to comply with arcane and sometimes outright ridiculous NCAA regulations regarding "student-athletes" by monitoring social media.

In general, however, courts have held that users of social media sites such as Facebook and Twitter know that the posts to these sites are publicly available, even if access is restricted to the user's "friends." Thus, many courts have held that users do not have a reasonable expectation that their postings will be private, though some have held that users do have such an expectation. See, generally, Expectation of Privacy in Text Transmissions to or from Pager, Cellular Telephone, or Other Wireless Personal Communications Device, 25 A.L.R. 6th 201 (2007); and Expectation of Privacy in Internet Communications, 92 A.L.R. 5th 15 (2001).

A court may also consider that college athletes are in effect "employees" of the universities that they play for, although colleges may recoil at such a ruling for a variety of reasons. But under such an analysis, the university would have the same rights as an employer to monitor employee's social media activities, whatever they may be.

The U.S. Supreme Court specifically declined to rule on this issue in City of Ontario, Cal. v. Quon, 130 S. Ct. 2619, 2630, 177 L.Ed.2d 216 (U.S. 2010). Quon involved a public employer – a city police department – which searched records of text messages sent to and from a pager issued and paid for by the city, seeking to determine whether a particular officer was using the device for personal messages during working hours.

While, as mentioned above, the Court declined to rule on whether the officer had a reasonable expectation of privacy, it did assume that such an expectation existed, and concluded that "[b]ecause the search was motivated by a legitimate work-related purpose, and because it was not excessive in scope, the search was reasonable ... ." Quon, 130 S. Ct. at 2632.

As I said in my previous post, "[s]chools may penalize students for specific Tweets or posts that are likely to lead 'substantial disruption of or material interference' with the team and its activities, but cannot impose a prior restraint on athletes in mere anticipation of such a comment." But, with most courts holding that there is no reasonable expectation or privacy in postings to social media sites, public colleges and universities are probably on solid legal ground when they monitor – without any interference prior to posting – athletes' social media posts.

Except, if the bill passes, in Maryland.

(Image of courtesy of Flickr user Monica's Dad under CC BY 2.0 license.)

The New York Times has weighed in with a story on this issue:
http://www.nytimes.com/2012/03/31/sports/universities-track-athletes-online-raising-legal-concerns.html