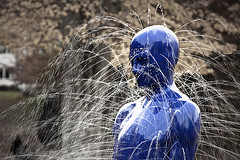 There has always been an active debate about whether the First Amendment affords government outsiders (like the media) any protection when they disseminate classified national security information without authorization.  As I mentioned in my last blog post, however, critics of the most recent round of high-profile leaks have targeted their attacks almost exclusively on the leakers themselves and not on the news outlets that published the leaks.  So the question is, do leakers have any First Amendment right to disclose national security information to government outsiders without authorization?

At the outset, let me just say leakers have a variety of statutory arguments they might make if prosecuted under the Espionage Act and related statutes.   Charlie Savage recently outlined a few of these arguments here. In addition, one of the obstacles the government might face is that in order to prove that the disclosure was harmful to national security, they might have to reveal even more national security secrets (often called “graymail”).  This is one reason why the Drake prosecution fell apart.

An addition obstacle to any First Amendment claim is that all public employees with access to sensitive national security information are required to sign nondisclosure agreements in which they agree to submit any writings related to their employment to prepublication review.  Thus, it would be easy to argue that employees who have signed such agreements have waived any First Amendment rights they might have otherwise enjoyed.  The validity of these waivers is a difficult issue, especially given the uncertainty of the unconstitutional conditions doctrine.  I will not address the validity of these waivers in this post, but I welcome any suggestions readers might have about how to undertake this analysis.

The Supreme Court has never addressed whether the First Amendment would protect leakers.  Although in the Pentagon Papers case the Court certainly left open the possibility of criminal prosecutions against both the press and the leakers, the prosecutions against the leakers ended in a mistrial due to prosecutorial misconduct.  In addition, in United States v. Aguilar, the Court stated that with respect to those who have voluntarily assumed the duty of confidentiality, “government restrictions on disclosure are not subject to the same stringent standards that would apply to efforts to impose restrictions on unwilling members of the public.”

If the Supreme Court ever heard a case involving the First Amendment rights of leakers, a big question would be whether the Court would analyze this question using the framework it has used to address the free speech claims of public employees generally.  Historically the government could punish its employees without worrying about the First Amendment, but this is no longer the law.   Instead, the Court has recognized that government employees can make valuable contributions to the public debate.  That said, the Court has placed a number of important restrictions on any First Amendment claim an employee might bring: (1) the speech cannot be made pursuant to the employee’s job duties; (2) the speech must be about a matter of public concern; and (3) the employee’s interest in the speech must outweigh the government’s interest in the efficient provision of services it provides through its employees.

The first requirement comes from the Court’s 2006 decision in Garcetti v. Ceballos. The primary rationale for the decision was that the government has a right to control what it pays for.  Stephen Vladeck has argued that Garcetti would strip public employee whistleblowers of free speech protection.  Steve bases this conclusion on language in the Court’s opinion that the First Amendment does not protect speech “that owes its existence to to a public employee’s professional responsibilities.”  He argues that because national security employees would not have access to confidential information but for their employment, they must have no First Amendment right to share that information.

Steve’s argument is certainly plausible, but it does not seem to be consistent with the main thrust of the opinion.   The bulk of Garcetti seems to be focused more on whether the speech at issue was made within the scope of the employee’s job duties. The Court attempted to draw a line between speech “as an employee” and speech “as a citizen.”  It would not make a lot of sense to say that a public employee speaks “as an employee” every time he says something that he learned through work. Of course if leakers gave information to the media as part of a coordinated P.R. campaign, as some critics claim occurred with the most recent leaks, there is a decent argument that Garcetti would bar any First Amendment argument because the leaks were made as part of the employees’ job duties.

Leakers who can survive Garcetti must still contend with two other obstacles to a First Amendment claim.  The first is the requirement that their speech involve a matter of public concern, a requiring the Court established in Connick v. Myers. The idea beyond this requirement is that the First Amendment should not “constitutionalize” every employee grievance.  As I have discussed in a prior article, determining what constitutes a matter of public concern is notoriously difficult, but in most leak cases, this requirement should not be much of a stumbling block.  It certainly would not be a problem in a case involving any of the most recent high-profile leaks.

The final – but most difficult – step for public employees would be to survive the balancing test the Court set out in Pickering v. Board of Education. Under this test, a court must balance the interests of the employee to comment on a matter of public concern against the interests of the government, as an employer, in promoting the efficiency of the services it provides to the public.  In Pickering itself, the Court left open the possibility that this balancing test would not apply in cases where “the need for confidentiality is so great that even completely correct public statements might furnish a permissible ground for dismissal.”  If the Court rejected a categorical approach, then it would face the daunting task of balancing the employee’s interest in disclosure against the government’s asserted need for continued secrecy. One would hope that at least some leakers – particularly whistleblowers who reveal government misconduct and waste – would prevail under this standard.  I will leave for another day a discussion of how the balancing test would come out for the current crop of leaks.

The problem is that the Court might not follow its own framework for analyzing the First Amendment rights of public employees.  In its 1988 decision Snepp v. CIA, the Court upheld the imposition of a constructive trust on all the past and future from the sale of a highly critical book about CIA activities in Vietnam because the author of the book – a former CIA employee – ignored his agreement to submit any of its writings to the CIA for prepublication review.  The government conceded that Snepp had not published any classified information, but it contended that it was damaged by Snepp’s failure to go through prepublication review because it gave rise to the “appearance” that the government cannot control the dissemination of its secrets and thereby made it difficult for it to obtain the cooperation of foreign intelligence sources.

Snepp is a good example of why the Court should never (or at least rarely) decide cases without the benefit of briefing or oral argument.   One of the many problems with the decision is that the Court did not even mention Pickering or the general framework it had established for the free speech claims of public employees.  The focus of the opinion was on what remedy to impose for Snepp’s breach of contract and not the validity of the contract itself.  Although the decision does not bode well for leakers, the fact remains that it did not directly address what First Amendment rights they might have, if any.

The only court to address whether government insiders have any First Amendment right to leak information to the media is the Fourth Circuit in United States v. Morison. In that case, a naval intelligence officer gave satellite photographs of Soviet naval preparations to the British publisher of a periodical about naval operations internationally.  In addition to rejecting Morison’s statutory arguments that the Espionage Act applied only in traditional espionage cases, the court also rejected his First Amendment defense. In addition to citing Snepp (which it recognized was not directly on point), the majority opinion cited Branzburg v. Hayes for the proposition that the First Amendment does not provide the press or its sources with immunity from otherwise valid criminal laws.  The court also held that the relevant Espionage Act statutes were not overbroad because the limiting instructions to the jury required it to find that the government demonstrated that the information was closely held and that the disclosure was “potentially damaging to the United States or useful to an enemy.”  Notably, however, the two concurring opinions recognized that the First Amendment argument was not frivolous and left open the possibility for a case-by-case analysis of the issue, particularly in cases involving leaks revealing government waste or misconduct.