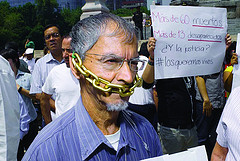 Reporters are routinely threatened, attacked, and killed if they report on crime.  Local law enforcement is often in the cartels' pockets, leaving journalists with little protection.  Over the past three years, Mexico has climbed to number 8 on the Committee to Protect Journalists' 2011 "Impunity Index," which tallies the unsolved murders of journalists around the world.  And that's to say nothing of those who are murdered after commenting on crime via social media – an alarming trend in recent years.  Is it any surprise that the local press often ignores crime reporting entirely, for fear of reprisal from the cartels?

Thus, last week saw some excellent news: The Mexican Senate on Tuesday approved a constitutional amendment that would federalize criminal attacks on journalists.  McClatchy reports that under the amendment, journalists would no longer be at the mercy of quite possibly corrupt local cops, but could instead turn to the federal authorities, who have a much better reputation re: corruption, for law enforcement.

Even better, the amendment is written in such a way that it may protect citizen journalists and social media users as well. The News, an English-language daily in Mexico City, reports that in relevant part the amendment reads:

Federal authorities may also take cognizance of crimes in general jurisdiction, when these crimes are related to federal crimes or crimes against journalists, persons, or installations that damage, limit, or impair the right to information or the freedom of expression, or the press.

Assuming this is an accurate translation, the amendment could prove to have a truly broad scope.  While "journalists" offers no guidance as to whether it includes citizen journalists, as is too often the case in federal legislation, be it Mexican or closer to home, the rest of the clause sends what looks to be a clear signal: Crimes that "impair the right to information or freedom of expression" are covered.

This could be a major step forward, as such users became a target of the cartels after the media was cowed.  Last fall saw four people killed, including a crime forum moderator and crime bloggers, in relation to their online activities.  These people were all in the unofficial business of passing along information about crime to others, and it was in relation to that business that they were killed.  I would guess that these sorts of crimes are meant to be covered by the amendment.

Now, don't rush across the border and start reporting on the Zetas and the Sinaloa cartel just yet.  Much like the U.S. system, congressional approval is just the first step of amending the Mexican constitution.  The amendment must still be approved by more than half of Mexico's 31 state legislatures before it becomes law.  And while the amendment's scope is excellent, the devil is in the details of its execution – just how will the federales enforce it?  The amendment itself offers no guidance.

Still, the CPJ is certainly pleased; CPJ executive director Joel Simon called it "a legislative milestone that has been years in the making."  And McClatchy reports that press advocates believe the states' approval is forthcoming, perhaps bouyed by President Felipe Calderon's apparent effort to establish his legacy (his term ends in July, and Mexican presidents cannot run for re-election).  If so, the amendment should bring a little more light – and safety – to Mexico's journalists, be they professional or simply little guys speaking truth to power.