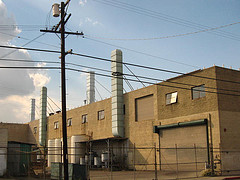 You might recall the Los Angeles Police Department's infamous Special Order No. 11, which directed officers to document in a so-called Suspicious Activity Report ("SAR"):

[A]ny reported or observed activity, or any criminal act or attempted criminal act, which an officer believes may reveal a nexus to foreign or domestic terrorism

This rule occasioned much comment from the photographer community, as one might expect. The problems with the "no apparent esthetic value" standard can be boiled down to two bleedingly obvious complaints: first, the police have no business judging aesthetic value under the First Amendment; and second, even if police could competently and constitutionally take action based on artistic merit, the rule disregards the legitimacy of photojournalism and other photography that is more concerned with documentation than aesthetics.

Well, it appears that the LAPD can stop recruiting officers with MFA degrees, but they aren't done with urban/industrial photography quite yet.  As reported by our friend Carlos Miller, on August 28th the Los Angeles Police Commission approved revisions to the SAR policy, dropping the reference to aesthetic value. The new policy addresses photography as follows:

These terrorism-related behaviors may indicate intelligence gathering or pre-operational planning related to terrorist activities or other criminal activity. These activities and behaviors include:

Note: These activities are generally protected by the First Amendment to the United States Constitution and should not be reported in a SAR, absent articulable facts and circumstances that support suspicion that the behavior observed is not innocent, but rather reasonably indicative of criminal activity associated with terrorism, including evidence of pre-operational planning related to terrorism. Race, ethnicity, national origin, or religious affiliation should not be considered as factors that create suspicion (although these factors may be used as specific-involved person descriptors).

Okay, so kudos to the LAPD for dropping an unreasonably subjective standard, acknowledging that the First Amendment deserves a mention here, and requiring that police not take action based solely on the subject matter of a photograph. (Of course, the U.S. Court of Appeals for the Ninth Circuit -- in which California is located -- acknowledged a First Amendment right to film matters of public interest, including the activities of police officers, over seventeen years earlier in Fordyce v. City of Seattle, but no matter. Better late than never.)

The problem is that the new policy still subjects urban and industrial photography to heightened police scrutiny. The above text basically tells officers to investigate people engaging in an activity that is constitutionally protected and deserving of no special police attention. Moreover, police are excellent at "articulat[ing] facts and circumstances that support suspicion" of criminal activity when they want to find it; e.g., appearing uncomfortable when approached by an officer, being in the wrong part of town, attempting not to draw attention to oneself or to act unobtrusively (as many photographers might when attempting to take candid shots without disrupting the activity they are trying to document), etc.

This is not an abstract concern, as demonstrated by recent encounters between photographers and the police at the Republican and Democratic National Conventions, which arose out of efforts to document those events (see here, here, and here). Whatever you might think of the behavior of the press or the police in these instances, such encounters should never take place simply because someone is taking pictures or shooting video.

Jeff Hermes is the Director of the Digital (nee Citizen) Media Law Project and has a passing familiarity with the First Amendment.