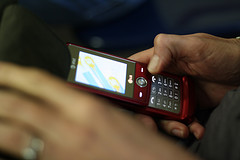 The Federal Judicial Center has released a study which concludes that "detected social media use by jurors is infrequent, and that most judges have taken steps to ensure jurors do not use social media in the courtroom," and implies that juror use of the Internet and social media during trial is not a growing problem.

Alison Frankel of Thompson-Reuters is skeptical about this conclusion, and I agree with her.

The FJC report was based on a survey e-mailed to all active and senior federal judges in October 2011. Of the 952 judges who received the survey, 508 responded – a response rate of 53 percent – from all 94 federal districts.

Of the 508 judges who responded, only 30 (six percent) said that they had experienced jurors using social media during trials and deliberations. Most (23 judges) had seen this during trial, rather than deliberations (12 judges), and judges reported seeing such activity more often in criminal cases (22 judges) than in civil cases (five judges). Three judges had experience with jurors using social media during both criminal and civil cases. Only two had experienced this in more than two cases of either type.

Seventeen of the judges also reported the substance of the jurors' activities: Five said jurors had done research on the case; four said that they had shared information about the case, such as its progress; three judges found jurors "friending" trial participants; and the same number of judges discovered jurors otherwise communicating with trial participants.

Of the 30 judges who discovered social media use by jurors, 28 indicated how they learned of the activity. Thirteen heard of it from fellow jurors, five were told by attorneys, and five said they found out via post-trial motions or interviews. Three found out from court staff, and two observed it themselves.

As the report itself points out, "the data from the survey represent judges’ reported experiences and perceptions of jurors’ use of social media to communicate about proceedings in which they are involved. The data are not actual empirical measures of such behavior." Study at 2.

And it seems dubious that the usage judges observed is all the usage there is, given how widespread Internet use is among the larger community from which jurors are drawn. While there is "no requirement that petit juries actually chosen must mirror the community and reflect the various distinctive groups in the population," Taylor v. Louisiana, 419 U.S. 522, 538 (1975), the jury pool from which trial juries are selected must "reasonably reflect[] a cross-section of the population suitable in character and intelligence for that civic duty." Brown v. Allen, 344 U.S. 443, 474 (1953).

But the issue here is how the jury pool correlates with frequent users of the Internet and social media, and then whether jurors who are such users can be convinced – or compelled – to not use these services while serving jury duty.

According to the Pew Internet and American Life Project, overall 78 percent of adults use the Internet. (There are, however, some variations on usage based on age and education level.) About 77 percent of adults do so on a daily basis.

If a jury pool is representative of the adult population, it certainly includes these daily Internet users.

The fact that only two of the judges in the survey discovered the social media use on their own shows that such activity is hard to detect, both inside the courthouse and – especially – outside of it.

There are certainly numerous anecdotal instances in which jurors have been found to be using the Internet or social media during trial. The problem is that it may be impossible to really know how many jurors are doing this.

But that doesn't mean that it isn't happening.