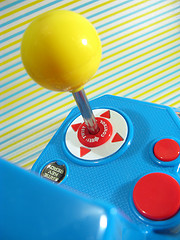 I'm not all that worried about YouTube's legal fate as such (I'm pretty sure Google can afford plenty of lawyers), but when the Second Circuit speaks on the DMCA, I listen. And really, the Court of Appeals' opinion (DMLP threat entry on the case here; .pdf of the opinion here) in Viacom v. YouTube is pretty decent on most of what I care about. But my focus today is on one particular spot in the opinion that turns out to be a bit squishy: the meaning of the statutory phrase "right and ability to control [infringing] activity." The parties presented two clear – albeit diametrically opposed – interpretations of the phrase, and the Second Circuit settled on... neither one. It's an unfortunate bit of fogginess in what could have been a seriously clarifying opinon. (After all, when the Second Circuit speaks on copyright, other courts tend to notice.)

A quick DMCA refresher, if you're rusty: The statute sets up a system to shield online service providers from copyright liability based on their users' activity. So in the YouTube case, the fight is over whether YouTube (and now its corporate daddy Google) can be held liable for infringing videos posted by users. If YouTube qualifies for the DMCA "safe harbor," it's in the clear. If not, there's pain on the horizon.

Sparing you full explication of all of the safe-harbor subtleties, it's enough to know that there are a few bad things that can disqualify a site like YouTube from protection – mines floating in the safe harbor, if you will. (And I hope you will.) The one I'm worried about today is at 17 U.S.C. § 512(c)(1)(B), and it's worth laying out the language. To keep its safe-harbor protection, a site like YouTube must:

not receive a financial benefit directly attributable to the infringing activity, in a case in which the service provider has the right and ability to control such activity.

You can see the two fights that can arise: (1) Is YouTube making money "directly attributable" to users' copyright infringement? (2) Does YouTube have "the right and ability to control" those users' behavior? The Second Circuit didn't deal with the "directly attributable" question (which is interesting in its own right), but it did have something to say about the second question: What does it mean for a website like YouTube to have "the right and ability to control"?

YouTube's lawyers had an answer: To have the ability to control an infringing video, we need to know exactly where it is. (So, something like a URL for the infringing video.) The idea here is that if YouTube doesn't know a particular video is sitting on its server, it can't be expected to take it down. And Viacom, of course, offered the reverse: YouTube can delete any video whenever it wants, so it has the "right and ability to control," period. But the Second Circuit didn't take to either suggestion.

At first glance, YouTube's argument seems reasonable enough – you have to know about something to "control" it. But another one of the mines-in-the-safe-harbor, § 512(c)(1)(A), already deals with this kind of "actual knowledge." (There was a big fight about this point, too, but the Second Circuit mostly sided with Google on the interpretation of (c)(1)(A).) Google's suggested interpretation of (c)(1)(B) runs the risk of making it redundant with (c)(1)(A), and courts don't like to do that. So, Google's suggestion is out.

Viacom's argument that the mere ability to delete is control, on the other hand, would swallow up the safe harbor completely, unless a service provider was constantly vigilant against any possibly-infringing material. And the whole point of the safe harbor is to take that load off of the Internet companies by giving them cover if they comply with some less-intrusive requirements. Thus, Viacom's interpretation was dead on arrival.

So that left the Second Circuit in a bit of a bind. If (c)(1)(B) doesn't require actual knowledge of the infringing activity, but does require something more than the bare technical ability to take down user-posted content, then what is that "something more"? Here, the Court of Appeals fudges, and that's what makes me a bit nervous. It's not that what they say is bad; it's just vague enough that we can't really know how lower courts will handle it.

The Second Circuit points to two other cases to help illuminate the "something more" problem, and we can use those cases to at least get a sense of what the Court of Appeals is going for. The first is a 2002 California district court case, Perfect 10 v. Cybernet Ventures. The facts are a bit convoluted, but in the end the district court granted the plaintiff's motion for a preliminary injunction because the defendant, Cybernet, was so closely involved in its member-sites' activities, it was likely likely to fail the (c)(1)(B) test. Basically, Cybernet sort-of-oversaw (if I may fudge some language myself) a network of adult-picture sites by operating an age verification service. As part of their operations, Cybernet enforced a bunch of rules on member sites: what kind of pictures they could post, how often different sites could repeat the same pictures, and so on. Because Cybernet was so closely involved in its member-sites' activities, the court ruled, it was likely to fail the (c)(1)(B) test. So in citing Cybernet, the Second Circuit is suggesting that if you're too hands on about what your users post, you might be on the hook if you let copyrighted material through.

Like I said, Grokster isn't a DMCA case, but you can see what the Second Circuit is getting at by mentioning it: If you create a file-sharing site called UploadPiratedFamilyGuyEpisodesHere.com, that sort of conduct can land you in hot water when it comes to the "something more" part of "right and ability to control." Even though you might not know when specific infringing clips are uploaded, you're pushing users to act in a way that you probably shouldn't be.

The Second Circuit sums up the point like so: "Both of these examples involve a service provider exerting substantial influence on the activities of users, without necessarily – or even frequently – acquiring knowledge of specific infringing activity." That sounds suspiciously like a legal standard – "exerting substantial influence" – but the court doesn't quite say outright that it's the test lower courts should use.

And that's what's frustrating. My initial impression of a "substantial influence" test is that it's not all that bad. If a website is creating an open forum for users to post what they will, the website is in the clear. If the website is pushing users to post specific content, and/or actively monitoring its quality and frequently vetoing substandard submissions, then it's in the danger zone.

But for whatever reason, the Second Circuit wasn't that firm. The key paragraph (in the middle of page 28) is cautious, equivocal, tentative; basically, just a vague suggestion of how this "something more" could work. I suppose the Court of Appeals wants to kick it down to the district court first, have the trial judge take the first crack at formulating a "something more" test, then re-evaluate if/when another appeal comes up, but that really sticks in my craw.

The Second Circuit is (along with the Ninth) the most influential court in the country when it comes to copyright issues (at least among courts that don't have an Antonin on them). And because so many cases settle, there's no way to know when another case that raises the (c)(1)(B) issue so squarely will make it back to the Court of Appeals. (I wouldn't be the least bit surprised if the YouTube/Viacom case settled at this point.) That leaves lower courts, and other, less copyright-inclined circuits, to keep making stuff up when it comes to the "something more." So while my best guess, based on the Cybernet and Grokster citations, seems like it could work pretty well, we've got no guarantees that other courts will see it that way. And I have full faith in the judicial system's ability to come up with something a lot worse.

John Sharkey is a CMLP blogger in his second year at Harvard Law School. He told you Josh Willingham was going to mash.