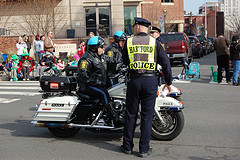 Connecticut, like most states these days it seems, has been having a problem with cops interfering with people photographing or filming them. Members of the Connecticut legislature are concerned about citizens being harassed for filming cops, and are working on passing a bill, No. 245, aka "An Act Concerning the Recording of Police Activity by the Public," to address the issue.  This is a good thing.

Unfortunately, the whole thing falls apart when you read the bill and discover it has almost no teeth.

To be fair to the bill's sponsors, their hearts are in the right place.   According to a press release from Sen. Majority Leader Martin M. Looney (D) of New Haven, the event that inspired the bill was the false arrest of Father James Manship, a New Haven pastor, after he recorded several East Haven cops who apparently were harassing Latino business owners.  The FBI subsequently arrested four East Haven cops on charges of false arrest and obstruction, among others. So the sponsors seem to have been trying to crack down on abusive cops – a commendable goal.

But the bill rather neatly establishes the right of the public to film cops before punching that right full of so many holes as to be unable to hold any water. Consider the bill's section 1(b):

On its face, and knowing that the specific sections cited are merely indemnity provisions for public officials, this all sounds pretty good.  Sure, it's vague on the details of what such liability might look like, but in lieu of a Glik v. Cunniffe-like decision in the Second Circuit, it's a step forward for Connecticut's watchers of the watchmen.

The problem is section 1(c).

(c) A peace officer shall not be liable under subsection (b) of this section if the peace officer had reasonable grounds to believe that the peace officer was interfering with the taking of such image in order to (1) lawfully enforce a criminal law of this state or a municipal ordinance, (2) protect the public safety, (3) preserve the integrity of a crime scene or criminal investigation, (4) safeguard the privacy interests of any person, including a victim of a crime, or (5) lawfully enforce court rules and policies of the Judicial Branch with respect to taking a photograph, videotaping or otherwise recording an image in facilities of the Judicial Branch.

In other words, as Reason's Mike Riggs puts it, citizens are allowed to record police officers "so long as the police officers in question don’t object to being recorded."

The 1(c) exceptions are so broad as to render the 1(b) right meaningless.  Police officers rarely seem to lack for belief that laws against resisting arrest, interfering with an investigation, and even loitering apply to instances when they were filmed by members of the public.  And someone's privacy is almost always involved when cops are doing their job, be it the victim's or the accused's – or even the cop's own, as Riggs notes. To merely require the cop have "reasonable grounds" to invoke the liability exception, particularly without defining "reasonable grounds," leaves 1(b) toothless.

Consider this particularly outrageous instance of cops responding to being filmed, coincidentally from within the Second Circuit in which Connecticut also lies, of a woman being arrested in her own front yard after she recorded a traffic stop in front of her house.  The cop claimed he didn't feel "safe" with her recording him, asked her to stop, and arrested her when she did not.

Were this fact pattern under Connecticut jurisdiction, the cop could say that what he really meant was that he felt she was endangering the investigation somehow – a 1(c)(3) exception – or that somehow public safety was at risk, a 1(c)(2) exception. Does he have "reasonable grounds" for such beliefs?  Hard to say without further guidance, guidance that the bill does not give.  But I can see cops winning such an argument, despite it seeming the wrong outcome.

Now, as I said before, I think the bill's sponsors mean well.  I'm further convinced of the sponsors' good intentions by some of the amendments they torpedoed: an amendment that would have explicitly excepted persons who "intended to inconvenience . . . any police officer" by recording the cop; an amendment that would create a presumption that the cop was in the right and put the burden on the plaintiff to prove otherwise; and an exemption for state capitol cops. All of these would have made the bill even more toothless, so kudos to the senate for shooting them down.

But the exceptions that remain still overwhelm the right that Bill 245 aims to establish.  What the Connecticut legislature really should do, if they want to protect the public's right to film cops, is to codify the Glik decision.  The First Circuit's reasoning is just as sound when applied to the Second Circuit, and frankly has been spending much more time considering such matters than the Connecticut legislature has as of late.