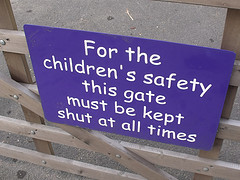 On February 7, 2012, the Joint Committee on the Judiciary of the Massachusetts Legislature will hold a hearing on Massachusetts Senate Bill No. 785, entitled "An Act relative to the protection of child witnesses." The bill would, among other proscriptions, make it a crime punishable by up to one year's imprisonment plus a fine for certain people to:

A "child," under the bill, is "a person who is under the age of 18, who is a witness to a crime committed against another person." The categories of people affected by the bill are (1) all employees of the government connected with the case, including outside consultants hired by the government, (2) employees of the court, (3) the defendant, the defendant's employees, and the defendant's counsel, (4) jury members, (5) attendees at the trial, and (6) "members of the media, who come across such documents or information regardless of the source of such documents or information."

As with much proposed legislation designed to protect minors, S.B. 785 seems more like a political tactic designed to show that its supporters care about our children rather than a functional piece of legislation that actually has a chance surviving the first constitutional challenge that comes along. To borrow a turn of phrase from Lawrence Lessig, the bill "practically impale[s] itself on the First Amendment."

Thus, S.B. 785's blanket ban on dissemination of court documents is facially unconstitutional on the basis of the speech that it is intended to prohibit. I am particularly impressed by the drafters' attempt to thumb their noses at an extra Supreme Court precedent by prohibiting publication of documents and photos by members of the media "regardless of the source of such documents or information." See Bartnicki v. Vopper, 532 U.S. 514, 527-28, 533-35 (2001) (First Amendment protects publication of newsworthy information by press even when information illegally obtained or released by journalist's source).

(Of course, if we're talking about the news media as intermediaries for content supplied by others, a news organization could simply allow third parties to post the prohibited documents and photographs to its website. The news organization would then receive immunity from state prosecution under federal law. See 47 U.S.C. § 230.)

But even if S.B. 785's intended effect were constitutional, the bill is so wildly overbroad that it would unconstitutionally criminalize a wide range of additional speech. Cf. U.S. v. Stevens, 130 S.Ct. 1577, 1587 (2010) (statute prohibiting depictions of animal cruelty unconstitutional under First Amendment due to overbreadth). By its literal terms, the parents of a child would violate the law if, after attending a trial at which their child testified, they sent a Christmas card with a family photo. If school officials testified at the same trial in which a student appeared, the class yearbook would need to be missing one picture.

Clearly, the drafters of the bill are most concerned about those pesky journalists, who are just waiting to ruin a child's life and get their kicks out of putting kids in danger (despite the fact that news outlets routinely exercise their editorial discretion to avoid putting minors at risk). The overkill approach of the bill to journalism is reflected in the fact that the definition of "attendees" explicitly, but entirely superfluously, includes members of the media who attend a trial; the media are already subject to the terms of the bill regardless of whether they are in attendance.

However, unlike shield laws and other laws intended to benefit the press where narrow definitions of the media might make logical sense (if not sound policy), using such a definition here to restrict press activity eviscerates the intent of the bill by exempting every amateur blogger and other non-professional user of electronic media, no matter how popular.

This is just one of the ways in which S.B. 785 is so poorly drafted that it cannot possibly achieve its intended goals. For another couple of examples, the bill applies to attendees at "trials," but not at other proceedings, and prohibits the release of documents, but not the separate release of the information contained in those documents or otherwise revealed in court. Not that the bill could be fixed by closing these loopholes, because doing so would violate the First Amendment rights of even a broader range of citizens.

It is possible that the drafters of the bill thought that by focusing on court records and documents instead of information, they were simply restricting access to material rather than imposing a categorical ban on speech. There is a significant difference, however, between preventing the media from obtaining access to the court and prohibiting them from publishing information that they have already obtained from the court. Compare Globe Newspaper Co. v. Superior Court for the County of Norfolk, 457 U.S. 596, 608 (1982) (requiring case-by-case evaluation of closure of courtroom, rather than automatic closure for testimony of minor rape victim) with Oklahoma Publ'g, 430 U.S. at 311-12 (where proceeding involving minor was open to the public, court was unable to issue prior restraint against media to limit reports of proceeding). Moreover, there is a First Amendment right of access to documents in criminal proceedings. See Globe Newspaper Co. v. Pokaski, 868 F.2d 497, 503-505 (1st Cir. 1989) (blanket closure of records in closed criminal proceedings implicates First Amendment).

It is small comfort that S.B. 785 is doomed to fail as unconstitutional even if it frightens enough legislators, worried about public perception of their position on children's rights, into voting for it. Defendants and prosecutors alike would be forced to go on a wild goose chase through the courts to strike down a law which should never have existed in the first place. Surely there are better ways for the legislature and the courts to spend their time.