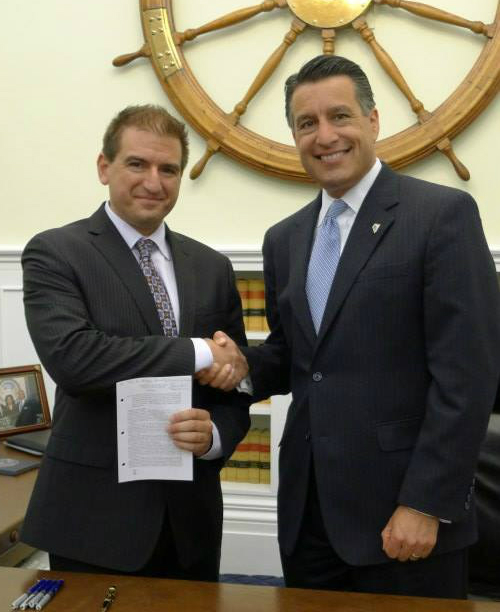 As of October 1, 2013, those targeted with frivolous lawsuits in Nevada designed to chill speech will enjoy substantially stronger protection, thanks to Nevada's new and improved anti-SLAPP statute.

The brainchild of First Amendment attorney and friend of the Digital Media Law Project Marc Randazza (pictured at right with Nevada Governor Brian Sandoval), Nevada's revised statute significantly improves upon the state's prior anti-SLAPP law. The revisions will grant defendants in Nevada courts some of the best and broadest protections for speech adopted by other states in their anti-SLAPP statutes since the passage of Nevada's original law.

Nevada's original anti-SLAPP statute, Nev. Rev. Stat. 41.637 et seq., was adopted in 1993. Like many other first-generation anti-SLAPP laws (such as those passed by Massachusetts and New York), its protections were limited to speech "in furtherance of the right to petition" the government on issues of public concern. Thus, it did not protect the broader range of speech among citizens on public issues, despite the critical role that such speech plays in civic life and in gathering support for petitioning. As such, Nevada's law fell out of step with anti-SLAPP laws passed by other states such as Washington, California, and Texas, which recognized that petitioning activity starts not with speech to government, but speech among peers.

With the signing of Senate Bill 286 into law on June 3, 2013, that will now change.  When the revisions take effect in October, Nevada's anti-SLAPP law will include a wide array of important improvements that enhance protection for speech, including:

The new version of the statute balances these enhaced protections with the creation of a "SLAPP-back" remedy for plaintiffs targeted with anti-SLAPP motions that are themselves "frivolous or vexatious." The specific changes can be seen on the marked-up version of SB 286.


The Digital Media Law Project would like to congratulate Nevada on its new law. We hope that this will set an example for other states with more limited anti-SLAPP laws to update their own statutes.

Jeff Hermes is the Director of the Digital Media Law Project, and would be pleased to see similar expansion of the anti-SLAPP law in his home state of Massachusetts.