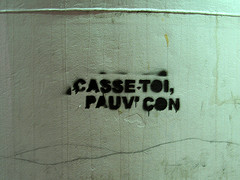 I wrote earlier about that odd remnant in French law of the Ancien Régime belief that the Head of State must not be insulted, and talked about the judicial saga of Hervé Eon, a French citizen, arrested and fined in August 2008 for having held a placard which read "casse toi pauvre con" ("get lost you a$$...") on the side of a road where Nicolas Sarkozy, then President of France, was scheduled to pass by.

Eon was found guilty of having offended the French President, and was sentenced 30 Euros, while the maximum sentence can be as high as 45,000 Euros. He filed a complaint with the European Court of Human Rights in Strasbourg, and he won. On March 14, 2013, the European Court of Justice held in Eon v. France that France had violated article 10 of the European Convention of Human Rights protecting the right to freedom of expression. (The opinion has only published in French, and the translations in this post are mine, not an official translation.)

Article 10 of the European Convention of Human Rights, to which France is a party, allows a public authority to interfere with freedom of expression, but only if such interference is (1) prescribed by law, (2) pursues one of the legitimate goals enumerated by article 10(2), and (3) is necessary in a democratic society. These three points are all taken into account by the European Court of Justice when deciding if a particular State law violates article 10.

In this case, The European Court of Human Rights found that sentencing Mr. Eon was an interference with his freedom of speech. Therefore, it undertook to determine if such interference was prescribed by law, if it pursued a legitimate goal, and if it was necessary in a democracy.

Prescribed by law: article 26 of the 1881 French Press Law

However, the Court of Appeals which confirmed Mr. Eon's sentence specified that "[t]he courts have recognized that the offense is constituted by any offensive or contemptuous expression, by any defamatory imputation that, while about the exercise of the chief magistracy of the State and his private life, is likely to attempt to his honor or dignity."

One must have the intent to offend, but truth is not admitted as a defense. The European Court of Human Rights was not bothered by this lack of an exception for truth, as "get lost you a$$..."is meant to be insulting and is not an allegation which could be proven true or false. The court of first instance had found intent, reasoning that "[i]f the accused would not have had the intention to offend, but only intended to give an incongruous lesson in politeness, he would not have failed to precede the phrase "get lost you a$$..." by a formula such as "we do not say."

Legitimate goal: Which goal is pursued by article 26?

The court of first instance had stressed in its opinion that "the law intends to protect the function of President of the Republic," and the French government argued in front of the Strasbourg court that a law criminalizing offending the President was necessary to protect order in society.

Indeed, Article 26 of the French Press Law is part of a "délits contre la chose publique" paragraph, literally, "offenses against the Res Publica," the Republic or the public affairs. Even though article 26 also protects the President in his private life, he is protected as the first Representative of the Republic. As such, only public prosecutors can initiate the pursuit; the victim himself does not have that power.

This legal oddity was not discussed in this case, but the independence of prosecutors vis-à-vis the President was called into question in 2010 by the European Court of Human Rights in the Moulin v. France case, where the court found that French prosecutors are not independent judicial authorities. The Court reasoned that they can be removed by the government, are under the authority of the Minister of Justice, and therefore under the authority of the executive.

Therefore, it is legitimate to wonder if the President could influence, albeit indirectly, the decision of the prosecution to enforce article 26. As a benchmark, no pursuits for offense to the President were engaged under the three Presidencies preceding Mr. Sarkozy's, that is, under Valery Giscard d'Estaing (right wing), François Mitterand (left wing), and Jacques Chirac (right wing). The last President often protected by the courts by article 26 had been Charles de Gaulle.

As a result, in Eon, the Court found the interest protected by sentencing Mr. Eon was the reputation of the President, not public order.

Necessity: Is Article 26 necessary in a democracy society?

In order to answer the question of necessity, under the fundamental principles of EHCR case law, the court does not substitute itself to the competent national authorities but rather reviews State court decisions in the light of article 10. Under the court's case law, the interference must be "relevant and sufficient" and the issue must be "proportionate to the legitimate aims pursued."

What Mr. Eon did could not be considered, according to the Strasbourg court, as "targeting [the President's] private life or honor, or that it was merely a gratuitous personal attack against the person of the President of the Republic" (§57). Instead, the plaintiff had the intent "to publicly address to the Head of State a critique of political nature" (§58). The Court noted that Mr. Eon was politically active, and had unsuccessfully tried a few weeks before the incident to prevent an illegal Turkish family to be expulsed from France.

Therefore, sentencing Mr. Eon constituted a restriction to freedom of speech in the field of political debate, where "freedom of speech is of utmost importance" (§59).The protection of a politician's reputation has to give way to satire.

The Court went on by explaining its view on satire (§60):

The Court finds, on the other hand, that by taking for himself the abrupt formula used by the president himself, widely disseminated by the media and then discussed and commented by a broad audience, often in an humorous way, the applicant has chosen to express his criticism on the mode of satirical impertinence. As the Court has repeatedly emphasized that satire is a form of artistic expression and social commentary, which, by exaggeration and distortion of reality, naturally aims to provoke and agitate. This is why it is necessary to examine with special attention any interference with the right of an artist - or anyone else - to express themselves through it (Künstler Vereinigung Bildender v. Austria).

The 2007 Künstler Vereinigung Bildender v. Austria case cited in Eon involved a situation where the plaintiff, an Austrian Representative, had been represented in a painting engaging in sexual acts with others famous persons. In that case, the Court held thatthat the Representative, as a politician,"ha[d] to display a wider tolerance in respect of criticism."

In Eon, the Court did not engage in a long discussion of what is satire, but pithily stated that "criminalizing behaviors such as the one in this case is likely to have a deterrent effect on satirical interventions about social issues that can also play a very important role in free debate of questions of general interest without which there is no democratic society" (§ 61).

The court concluded therefore that sentencing Mr. Eon was disproportionate to the goal meant to be achieved, the protection of the reputation of the President, and was thus not necessary in a democratic society under article 10.

The future of lèse majesté

While it is now almost certain that France will abolish its lèse majesté law this year, other European countries, including Spain, Italy, the Netherlands, Poland, and Turkey, which is a candidate for EU membership, still incriminate lèse majesté.

In the 2011 Otegi Montdragon v. Spain case, the European Court of Human Rights had held that Spain had violated article 10 of the Convention when it sentenced an individual who had ‘seriously insulted' the Spanish King within the meaning of Article 490,3 of the Spanish Criminal Code. The court noted in this case that the remark aimed at the King did not concern [his] private life... or his personal honour, nor did they amount to a gratuitous personal attack against him" (§ 57). The law was not abolished following the Otegi case, and, as recently as last month, a Spanish court imposed a fine of 6,480 Euros on an individual for insulting the King.

Even though the Court in Eon did not go as far as to state that article 26 is unconstitutional, which would have obliged France to abrogate it, the French Representatives heard the message loud and clear. France will soon say good bye to article 26, and good riddance.