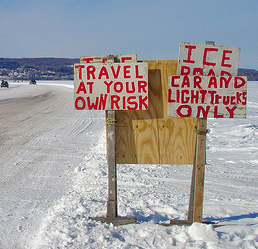 This decision, Delfi v. Estonia, may have negative effects on freedom of expression on the web as sites may become concerned about the responsibilities they could face if they keep their digital soap boxes open to the public.

Here are the facts of the case. Applicant Delfi, one of Estonia's largest news portals, allowed visitors to post comments about articles published on the site. About 10,000 comments were published every day, most of them anonymously. Delfi did not edit or moderate the comments, but those including obscene words were deleted automatically through a word-based filter. Also, users could flag insulting or hate-inciting comments, which were then removed. Victims of defamatory comments could contact Delfi, which deleted such comments immediately.

In January 2006, Delfi published an article about an Estonian ferry company whose decision to change ferry routes had caused some public ice roads to break. These roads are opened every winter by the Estonian government on some parts of the frozen Baltic Sea to allow traffic between the mainland and various islands. They can be used for free instead of paying a fee to the ferry company, and this is why many irate readers published inflammatory comments about the ferry company and about L., its sole majority shareholder.

In March 2006, L.'s lawyers contacted Delfi by letter asking that these comments be removed and claiming 500,000 Kroons in damages (~32,000 euros). Delfi complied with the request to remove comments the day it received the letter, but refused to pay any damages. L. sued.

Delfi described its system to the ECHR as "a technical medium allowing users to publish comments," which put its users on notice that they may be liable for posting illegal comments such as insults, threats, or "obscene expressions and vulgarities" and that Delfi has the right to remove such comments.

Did that make Delfi a publisher or a mere host? The Estonian courts diverged on this point, interpreting differently the Estonian law which had implemented the 2000 European Union E-commerce Directive.

Article 14 of this Directive provides a liability exemption for information society service providers (ISSPs) storing information provided by a recipient of the service. ISSPs are defined by article 2(a) of the Directive as "any service normally provided for remuneration, at a distance, by electronic means and at the individual request of a recipient of services."

In order to benefit from that exemption, the ISSP must not have actual knowledge of the illegal information stored and must remove it "expeditiously" after being informed of its existence.

The first court found that Delfi was not a publisher, as the way it administrated the comments section of the site was "essentially of a mechanical and passive nature" (at 19). L. appealed and won. The case was sent back to the lower court which ruled that Delfi was a publisher and thus could not benefit from the liability exemption. The court reasoned that Delfi was not a mere technical intermediary but instead invited readers to post their comments online. The Estonian Supreme Court approved the lower court decision in 2009.

After that, Delfi started moderating all comments posted on the site and took its case to the ECHR, claiming that holding it liable for the comments published on the site was a violation of article 10 of the Convention, which comprises the right to impart information.

Delfi argued that its role had not been an active one and it merely stored the comments published by individuals. It also argued that the mere fact that it had procedures in place to delete illegal comments should not make it a publisher and that such ruling encourages hosts not to take any such measures to avoid liability.

But the ECHR refused to rule on whether Delfi was a publisher or a mere host, reiterating that its role is not to take the place of domestic courts, but rather to determine whether if their decisions are compatible or not with the European Convention of Human Rights.

This is regrettable, as this issue is the crux of the case.

No Violation of Freedom of Expression

What the ECHR reviewed is whether the Estonian court's decision had violated article 10 of the European Convention of Human Rights protecting freedom of expression.

This includes freedom "to impart information and ideas without interference by public authority and regardless of frontiers." However, this freedom may be restricted by law, if "necessary in a democratic society" to protect "the reputation or rights of others."

The ECHR consistently interprets interferences to free speech "necessary in a democratic society" as meaning that a pressing social need must exist, but it consistently refuses to take the place of the competent authority to assess case-by-case the existence of this need. Its role is instead to find out whether the decision made by the national authority is "proportionate to the legitimate aim pursued" (at 78).

In order to balance these two rights, the ECHR considered the context of the comments, the measures applied to prevent/remove the comments, the liability of the authors of the postings as an alternative to Delfi's liability, and the consequences of the domestic proceedings for Delfi.

As for the context of the comments, the ECHR found the topic of ferry services to be of general interest, but also found that publishing the topic was likely to create "a higher-than average risk that the negative comments could go beyond the boundaries of acceptable criticism and reach the level of gratuitous insult or hate speech" and therefore, Delfi should have exercised particular caution (at 86).

This statement gives rise to concern, as sites may from now on avoid publishing articles on topics which may create a wave of negative comments, or at least think twice before allowing comments to be posted. Also, it is so vague at it could describe just about any topic, from politics to television shows.

As for the measures taken, the ECHR cited its 2007 Lindon, Otchakovsky-Laurens and July v. France case. In this case, applicants had complained that their conviction for defamation and complicity in defamation on account of the publication of a book about a French right-wing party leader was a "penalty" that was not "prescribed by law" under article 10 of the Convention. They argued that therefore their conviction had not been "foreseeable" as the French court had used "a subjective and random approach that did not allow writers to predetermine the limits to authorized speech with which they were supposed to comply." The ECHR was not convinced, stating that a law may still be foreseeable even if a person must "take appropriate legal advice to assess... the consequences which a given action may entail. This is particularly true in relation to persons carrying on a professional activity." Well, legal advice may be costly, and that may further deter news portals from allowing comments on their sites.

The ECHR noted, rather slyly, that the Estonian courts had left Delfi the choice on how to protect third party rights, even pointing out that no prior registration of users had been required (at 90). But the court immediately concluded in the next paragraph that by allowing comments by non-registered users, Delfi had "assumed a certain responsibility for these comments" (at 91).

By doing so, the ECHR avoids any suspicion of encouraging speech restraints, but, in essence, subjects any news portal to a sort of economic prior restraint, even though the economic sanction, a small fine, was not severe. The consequence of the decision for Delfi goes beyond the fine, and is a serious threat to its business model.

A Threat to the Right to Speak Anonymously on the Web

As for the liability of the authors of the original posts, the ECHR noted that indeed L. could have sued them, but that would have been difficult, as most of the comments were anonymous.

The ECHR first carefully stated that it is "mindful...of the importance of the wishes of Internet users not to disclose their identity in exercising their freedom of expression" (at 92), but also immediately after that, expressed concerns that information publicly posted on the Internet may be there forever and can be difficult to have removed.

Because individuals do not have tools to monitor what is being said about them, news portals such as Delfi must carry this responsibility according to the ECHR, finding that this requirement is not disproportionate interference with a media company's right to freedom of expression. It quoted its 2006 Krone Verlags v. Austria case which held that holding a publisher liable for costs of proceedings against a defamer whose statement had been published in its newspaper is not incompatible with Article 10. However, the Krone Verlags case is not a case about either online or anonymous speech. In that case, a newspaper had published an article quoting defamatory comments about a person and had been found jointly and severally liable with the author of the comments. The newspaper had argued in front of the ECHR that joint and several liability could not be prescribed, as the paper had not failed to comply with "journalistic diligence." It pointed out that the article had been written in an objective manner and had correctly reported the conflicting versions of an incident, quoting the author of the defamatory comment without taking sides. The ECHR had found no violation of article 10.

The case is not final, and may still be appealed to the Grand Chamber of the ECHR. Let's hope it will be overturned, as requiring news portals to bear responsibility for anonymous speech posted on their sites may very well chill speech on the Internet, particularly anonymous free speech. Damages to Delfi, and to the public, may very well be far in excess of a mere 5,000 Kroons.