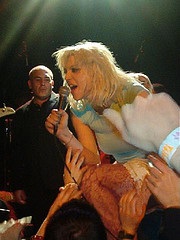 Last week, Courtney Love filed a motion to strike the lawsuit brought against her by Austin-based fashion designer Dawn Simorangkir (a/k/a the "Boudoir Queen").  In her m0tion, Love invokes California's anti-SLAPP statute (Cal. Code Civ. Proc. § 425.16), a law designed to deter frivolous lawsuits brought to discourage individuals and organizations from speaking out on public issues or controversies.  Originally fashioned as protection for environmental groups sued by land developers over campaigns to galvanize the public and government regulators, the anti-SLAPP law is now understood to apply to a broad range of speech activities. If Love's motion is successful, it will apparently protect celebrity trash talking on Twitter.

Simorangkir sued Love in March over statements made on Twitter, on Love's MySpace blog, and on Simorangkir's feedback page on etsy.com, an online marketplace for independent designers.  In her complaint, Simorangkir alleged that, after their business relationship soured, Love used these online platforms to falsely accuse Simorangkir of lying, stealing, dealing drugs, assault, prostitution, and losing custody of her child, among other things.  Cmplt. ¶ 24, 26.  Many of Love's posts were grammatically challenged, and some were downright incomprehensible.  Others, like this one posted to Twitter, were just totally bad ass: "oi vey don't fuck with my wardrobe or you willend [sic] up in a circle of [s]corched earth hunted til your dead . . . ." A force of nature indeed.

Not to be outdone, Simorangkir fired back, speculating in her complaint that Love's rants must be the product of "a drug induced psychosis, a warped understanding of reality, or the belief that her money and fame allow her to disregard the law." Cmplt. ¶ 1.

But enough of this gossipy goodness, what about the law?  Well, to win her anti-SLAPP motion, Love has to show that Simorangkir sued her for an "act in furtherance of [her] right of petition or free speech under the United States or California Constitution in connection with a public issue." Although people often use terms like "free speech" and "petition the government" loosely in popular speech, the anti-SLAPP law gives this phrase a particular legal meaning.  In Love's case, the question comes down to whether her comments (1) were made in a public forum; and (2) related to an issue of public interest.

It's pretty well established that websites like MySpace, Twitter, and Etsy qualify as "public fora" under California law, so the real challenge for Love is proving that her statements relate to an issue of public interest. At first blush, you might doubt that a personal catfight between a celebrity and her fashion designer over "up-cycled" clothing could possibly meet this criterion, but Love's lawyer does a good job showing that this first impression might just be misleading.

For one thing, California cases say that information warning consumers about bad products or services often qualify as a matter of public interest.  Keith Fink, Love's lawyer, cites this language from a pre-Internet case that foreshadowed nicely what you see today on consumer review websites like Yelp, Angie's list, and Section 230 poster child Rip-off Report:

Members of the public have recognized their roles as consumers and through concerted activities, both private and public, have attempted to improve their . . . positions vis-a-vis the [suppliers] and manufacturers of consumer goods.  They clearly have an interest in matters which affect their roles as consumers, and peaceful activities, such as plaintiffs', which inform them about such matters are protected by the First Amendment.

Paradise Hills Assocs. v. Procel, 235 Cal. App. 3d 1528, 1544 (1991).  True enough.  And Mr. Fink does a valiant job arguing that Love is a consumer and that her online rants were really just warnings to other consumers not to do business with Simorangkir.  This is convincing to a point, but I wonder whether some of the more damaging statements — those relating to Simorangkir's alleged criminal history and drug use, for example — properly fall into the category of "consumer warning."

Mr. Fink also rightly points out that matters involving a celebrity's personal life often constitute matters of public interest.  Samantha Ronson found this out when she sued Perez Hilton for defamation in 2007.  In granting Hilton's motion to strike under the California anti-SLAPP law, the court found that Mr. Lavandeira's statements related to a matter of public interest, in part because they pertained to Ronson's relationship with Lindsay Lohan. OK, but there's something a little odd about a celebrity like Love trying to use her own notoriety to turn every statement she makes into a matter of public interest. Recall that in Ronson's defamation case, Hilton was a third-party blogger commenting on Ronson's relationship with another celebrity.  In the present case, Love made statements about her own failed business relationship with Simorangkir.

Still, it's not a bad argument; people are interested in what Courtney Love wears and in her wild antics. That's not to say every banal thing the public would like to hear about qualifies as a matter of public interest for purposes of the law, but courts often are hesitant to declare matters too trivial to be newsworthy, lest they become ill-equipped gatekeepers of the news that's fit to print.

After grappling with the public forum/public interest question, Love's brief goes on to argue that Simorangkir cannot prevail on the merits, which is the second stage of the anti-SLAPP analysis.  I don't have the time or space to comment on these arguments in any detail, but perhaps the most compelling — certainly the most brazen — argument is that Love lacked actual malice because she entertained no serious doubts about the factual accuracy of the statements she made.  Oh snap!  But if we're talking actual malice, this assumes that Simorangkir is a "public figure," which may be more difficult to show than showing that the statements themselves were of public interest. Then again, Simorangkir's prominence as a fashion designer might earn her that distinction. In any event, I'm not willing to put my money down on this one yet.

We'll be monitoring developments through our database entry, Simorangkir v. Love, so check back in a few months for the court's ruling.