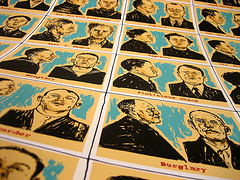 When Tim Donnelly, a 26-year-old job seeker, Googled his name recently he found that the first link provided was that to a mugshot of him taken seven years ago. He got into a fight as a teenager and was arrested for criminal trespass and assault. According to Donnelly, the trespass charge was dismissed and the assault charge was downgraded to disorderly conduct. "I have since learned better," he said.

What bothered Donnelly wasn't the publication of his mugshot per se, but instead the companies working together to solicit payment for its removal. "I am all for having a completely open government," he said, "but something needs to make this online shaming device stop." Donnelly believes he has a solution.

Since I wrote about the prevalence of mugshot websites last October, many CMLP readers weighed in with their own take on what David Kravets described in Wired as a "racket." According to Kravets's article, self-described "reputation companies" are part of an emerging industry of websites publishing mugshots and then charging those pictured to remove the photos to spare them further embarrassment.

"This is not a ‘mugshot business' or ‘mugshot industry'," wrote one reader. "This is extortion... The demand: Pay up or it stays up." Another reader noted that many of these sites defend their right to publish mugshots — which are public records in many states — by claiming they are news organizations: "They're not a ‘news organization' by any stretch of the imagination," that reader wrote. "They have zero/zilch bona fide news media credentials... [They] break every accountable, professional, bona fide news media/news-reporting 'code of ethics' out there."

Donnelly contacted me shortly after my blog post ran to comment on the mugshot phenomenon. He immediately began outlining his plan to deactivate this mugshot minefield. His solution is to legislate a public records exemption for those who would be using the records for "commercial purposes." Donnelly, a Fort Worth, Texas, resident, is currently lobbying his representatives to enact such a clause in his home state's FOI law. Presumably, such an exemption would prevent companies from exploiting public record laws while allowing news organizations to continue with their business.

At first blush, such an exemption seems conceptually absurd. Public records are considered such because the information they provide is of value to the community and necessary to maintain an informed citizenry. The information itself does not change based on the purpose and intent of the party distributing that information. The public is informed regardless and the objective of FOI law is met. There is also the issue of news media having commercial purposes, and so a commercial exemption could result in potential First Amendment conflicts. Further, if the intent of such a proposal is to distinguish journalists from mere profit-seekers such as the aforementioned reputation companies, then legislators would be marching into an ongoing battle over the definition of "journalist."

Despite these immediate concerns, however, what Donnelly proposed is already being practiced. Indiana, for example, allows its agencies and "political subdivisions" to prohibit the release of public information in electronic form, if that information is to be used for commercial purposes. Ind. Code. § 5-14-3-3. This bar to public information does not apply to the "publication of news," but as shown by one state official's explanation, the distinction can be a difficult one to make. In a dispute last year over a website's access to digital mugshot photos, Indiana's Public Access Counselor, Andrew J. Kossack, wrote the following:

...if a newspaper received the type of records sought in the request at issue here, it could publish a story about some aspect of the arrest process generally or about the particular arrestees specifically... [But] the same newspaper could be restricted from establishing a for-profit, fee-based database on its website that used the information to "sell, advertise, or solicit the purchase of merchandise, goods, or services."

So, it appears that an Indiana publication can safely publish a mugshot in its newspaper, but if that same mugshot is aggregated with others in a database for which access costs a fee, then there could be a violation. In both scenarios, the same information is being provided. Assuming it is not a free newspaper, both instances involve payment for that information. The difference under Indiana FOI regulations, is that once a mugshot becomes part of a database, it is no longer "news" but a commodity, as if there is no news value in the information that database provides. Many, including myself, would argue otherwise. Further, if that fee is removed to comply with the law, then with that fee will go any incentive to create the database in the first place. As most government agencies are lax in centralizing public records online, there should be more incentive for third parties to step in, not less.

The U.S. District Court in Rhode Island addressed the issue of "commercial purpose" exemptions in 1999, declaring a similar law partly unconstitutional. Rhode Island's public records law states that "no person or business entity shall use information obtained from public records" to "solicit for commercial purposes. . . ." R.I. Gen. Laws § 38-2-6. Those doing so face a fine of up to $500 and imprisonment for up to a year. Id. The Rhode Island Association of Realtors, however, wanted to use public records to identify new or recent real estate licensees in the state to recruit new members. Rhode Island Assoc. of Realtors v. Whitehouse, 51 F.Supp.2d 107 (D.R.I. 1999), aff'd 199 F.3d 26 (1st Cir. 1999). Fearful that the statute prevented it from doing so, the association sought a declaratory judgment that the law violated its First Amendment rights. Rhode Island Assoc. of Realtors, 51 F.Supp.2d at 109. Using the Central Hudson test, the court found the statute was not narrowly tailored to address the state's interest in protecting the privacy of its citizens. Id. at 114. That interest could instead be protected by excluding certain information from the statute's scope, rather than creating distinctions based on the intent of the requestor. Id.

If privacy is the goal, a law that discloses private information to some requestors but not others fails to offer protection. The information is still disclosed. Ultimately, I believe this is where such "commercial purpose" exemptions falter. Even if a statute could adequately distinguish between bona fide news organizations (whatever that means) and those dealing in the mugshot trade (however that's defined), the photo can still be released and the arrestee's privacy vanquished.

The frustration of those like Donnelly is understandable. Because there is no central repository for public records, mugshot websites can exploit state FOI laws and profit from what seems like a shady practice. The practice seems shady because there's a degree of unfairness when a private company plays gatekeeper to embarrassing information and then charges a heavy toll to keep it quiet. Though I may not agree with many of the proposed responses to this practice, I can certainly empathize with those whom are caught up in it and compelled to pay.

But as I told Donnelly, context is everything. Rather than making it more difficult to obtain information, it is almost always preferable to simply provide more. Having been arrested myself years ago — cuffed by an overzealous cop when I refused to leave a valid press area while working as a journalist — I remember the feeling of panic when a Google search of my name brought up reports of the arrest. To combat the misconceptions I believed existed, I took every opportunity to fill in the gaps left by those stories. By challenging what he perceives as a deceptive practice, Donnelly is sharing more about himself and creating a new impression, one that will eventually overshadow his previous indiscretions. The saying "fight speech with more speech" applies to not just speech, but all information — even if only that contained in a mugshot.