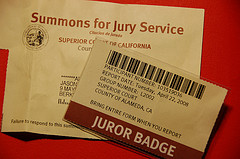 A survey of jurors from 15 trials has found that jurors generally understand instructions not to use the Internet or social media to research or communicate about trials, but also that many jurors wish they could use technology to do some sort of research about the cases they sat on. Very few, however, reported that they had violated admonishments not to research or discuss the case with others prior to deliberations, and all of these involved pre-deliberation discussions with either fellow jurors or family members. None involved the internet or social media.

The study questioned impaneled jurors from six criminal and nine civil trials, as well as jurors from the voir dire phase (i.e., including those both ultimately chosen to serve on the jury and those that were not) of these trials plus an additional seven civil cases that settled during jury selection.

In all the cases, the jurors were instructed during voir dire and trial not to use the internet or social media to research or communicate about the case. The majority of jurors reported in the survey that they understood these admonitions. Among prospective jurors, 87 percent understood that they should not use the internet or social media to communicate with friends or family or to post information about the case,  and two-thirds said that researching the case online would violate the judges' instructions.

Understanding the judges' admonitions against internet use also did not mean that some jurors would not be tempted. While 86 percent of perspective jurors said they could refrain from internet use during trial, 14 percent said they likely could not. The study's authors speculate that as more "digital natives" -- younger people who are more familiar with frequent internet usage -- join the jury pool, the latter figure is likely to rise.

But the study found that none of the jurors tempted to use the internet reported that they did so. The study did find, however, than 10 percent of jurors and alternates admitted to discussing the case with fellow jurors prior to deliberations, and six percent admitted to discussing the case -- the old fashioned way, either in person or by phone -- with family and/or friends during trial. But only four of the 16 jurors who admitted to such discussions reported that these discussions helped them understand evidence in the cases.

Despite these findings that no jurors in the study had acted improperly online, more than half of the 15 judges surveyed as part of the study ranked juror use of the internet to research or discuss cases as an important concern, rating it either a 4 or 5 on an escalating scale of one to seven.

The authors note that this was a preliminary study, and that additional research is needed. "These tentative findings encourage cautious optimism that the frequency of juror misconduct involving new media currently is less than one might imagine based on the number of recent news media accounts of jurors run amok," they conclude, but add that "[t]he pilot study findings are less optimistic about the future."


As younger cohorts join the jury pool, access to the Internet and reliance upon it for information-gathering can only increase. Judges and lawyers therefore can expect to see jurors’ desire to use these tools increase in coming years, and they will have to take more effective steps to convince jurors to forgo these tools in the interest of fairness to litigants. A key factor will be the degree to which jurors continue to believe that the testimony of witnesses, especially expert witnesses hired by the parties, is more compelling evidence than what they can uncover on their own through information available to them via the Internet.

This study, as the authors point out, is small and by no means conclusive. The same is true of other studies of juror use of the internet and social media -- including my own -- because of the inherent problems in quantifying such activity.

But all of these studies conclude that juror use of the internet and social media is an important issue for the courts, and is only going to increase as the population gets more wired and more used to instant access to information via mobile devices.