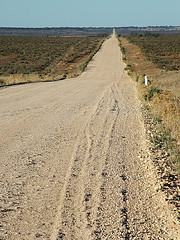 Pulitzer Prize-winning journalist Paul Salopek is currently on a long walk...a walk across continents that is expected to take approximately seven years to complete. An extraordinary experiment in what Paul calls "slow journalism," the Out of Eden Walk will see Paul -- on foot at a rate of three miles per hour -- trace humanity's 60,000 year expansion out of Africa, through the Middle East and Asia, and down the length of North and South America. Dispatches from along the way will illustrate the cross-section of the human race that Paul encounters along his way, part of an innovative storytelling platform designed to explore who we are as a species, where we came from, and the journey that we are still on.

Clearly, for such a monumental project Paul requires an extensive support system, including representatives here in the United States who can coordinate the venture during the extended periods when Paul himself is out of ready contact. The form that the Out of Eden Walk has selected is a nonprofit organization that can operate as a legal entity in the United States. In November 2012, that entity applied for tax exempt status from the IRS, a critical step for securing the funding necessary to support the project.

As our regular readers will know, for a while now the DMLP has been tracking the progress of journalism organizations through the IRS process for obtaining Section 501(c)(3) tax exempt status. Applications from news organizations have been encountering crippling delays (sometimes up to two years) that can threaten the viability of a nonprofit venture. There have been some signs of improvement -- a few news organizations long delayed in the IRS process have obtained their tax exemptions, such as the San Francisco Public Press and The Lens -- but it is far from clear that the IRS has resolved its issues with journalism.

We are not the only organizations concerned about these issues. On March 4th, the Nonprofit Media Working Group of the Council on Foundations (under a grant from the Knight Foundation) released its report on IRS treatment of nonprofit media organizations, "The IRS and Nonprofit Media: Toward Creating a More Informed Public."

The report is well worth perusing, and comes to five basic conclusions as to problems with how the IRS is handling applications for Section 501(c)(3) status from media and journalism organizations:

"1. Applications for tax-exempt status are processed inconsistently and take too long.

3. The IRS approach appears to inhibit the long-term sustainability of tax-exempt media organizations.

4. Confusion may be inhibiting nonprofit entrepreneurs trying to address the information needs of communities.

5. The IRS approach does not sufficiently recognize the changing nature of digital media."

Many of the recommendations that the Report makes relate to the standards applied by the IRS in reviewing applications from nonprofit journalism organizations, a byzantine analysis described in detail in the Digital Media Law Project's Interactive Guide to the IRS process. The Report urges greater respect by the IRS for journalism as an educational endeavor, and less concern over operational similarities between for-profit and non-profit news organizations.

Under these circumstances, we were thrilled, and indeed astounded, to learn that on February 28th -- a mere three and a half months after it filed its application -- the Out of Eden Walk received a positive determination from the IRS on its 501(c)(3) status. The speed of this determination is not only remarkable for a journalism organization, but for a nonprofit organization of any type.

It is too early to say whether this marks a shift in the IRS's attitude toward journalism as a whole; the Out of Eden Walk obviously has substantial differences from other nonprofit journalism ventures. It is nevertheless reassuring that the agency was so quickly able to reach a decision on the educational value in this innovative approach to reporting and storytelling.

We congratulate Paul and the Out of Eden Walk on their success at the IRS, and wish them the best of luck on the road ahead!